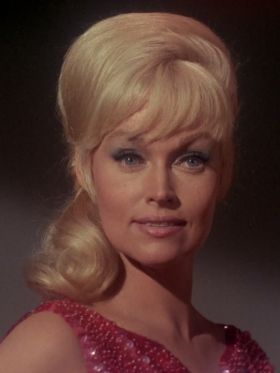 Eve McHuron, Magda Kovas, and Ruth Bonaventure were accompanying Harry Mudd as wiving settlers aboard a Class J cargo ship on Stardate 1329.1 when it was destroyed while attempting to evade pursuit by the U.S.S. Enterprise NCC-1701. The four were rescued by the Enterprise just prior to their ship's destruction, but the effort caused significant damage to the Starfleet vessel. As the Enterprise traveled to Rigel XII to obtain needed lithium crystals, Mudd secretly contacted the miners there—Ben Childress, Hiram Gossett, and Benton—and negotiated a deal to exchange the women for control of the crystals that the Enterprise needed. Unbeknownst to the miners, the women had actually been using an illegal Venus drug in an attempt to deceive the miners into a fraudulent marriage, whereupon they would have access to the men's wealth. The deception was not discovered until after the deal had been completed, and Benton and Gossett had been married over subspace radio to Kovas and Bonaventure. Kirk assured the miners that the marriages could be annulled if they so chose. McHuron, who had developed a crisis of conscience during the incident, admitted the scheme when confronted by Captain Kirk and Childress. She had begun to develop a genuine relationship with Childress, and elected to remain behind with him on Rigel XII.[1]