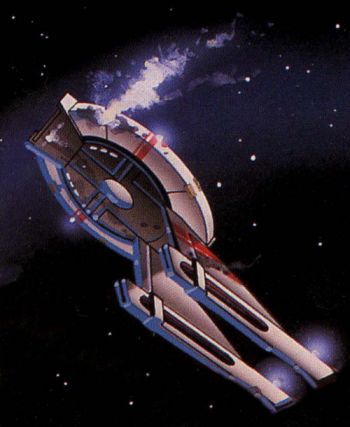 Although the Ranger class maintained the familiar saucer and nacelle configuration employed by the majority of Starfleet vessels, the saucer itself was of a more unusual design than other Starfleet ships, as it did not employ a swappable bridge module atop the saucer; the bridge was, instead, buried within the ship's hull on Deck 2.[1]

Deck One held all crew quarters and support facilities, including a gym, mess hall, sickbay, and life support; the ship's emergency batteries and torpedo tubes were also located on Deck 1. Deck 2 housed the bridge, transporter rooms, science labs, computer, and cargo bays. Deck 3 contained Engineering, the ship's armory, the brig, and the majority of the ship's engineering facilities. The shuttlebay extended through Decks 2 and 3 at the fore of the ship.[1]

The numbers given for Mark I and Mark II Ranger class vessels commissioned in the "Federation Ship Recognition Manual were erroneous; the original numbers were 102 Mark Is and 108 Mark IIs; the total number of ships, including Mark IIIs, was given as 159. The numbers listed on this page were adjusted to correct this error.