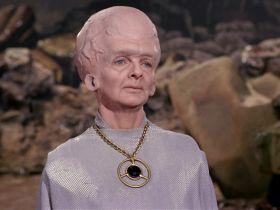 In 2236, the S.S. Columbia disappeared after checking in near the Talos Star Group, where it crashed on Talos IV. Only one member of the expedition, Vina, survived, and while the Talosians were able to repair her body's injuries, they were unfamiliar with Human anatomy, and she was left disfigured. Nearly twenty years later, in 2254, the Talosians lured the U.S.S. Enterprise NCC-1701 to Talos IV. The Talosians captured Captain Pike, hoping to use him and Vina as breeding stock to help repopulate their world. With a lifespan "many times" that of Humans, they planned to carefully guide Pike and Vina's offspring, and thousands of Talosians actively scanned Pike's mind during his captivity. Their plan failed when they realized that Humans were too aggressive a species for their needs. They let Pike and the Enterprise go, but Vina chose to stay behind.[1]