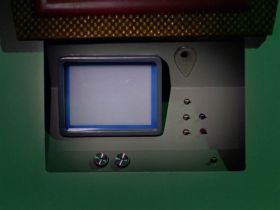 While on a landing party, Commander James T. Kirk discovered the Tantalus Device, which allowed its operator to remotely vaporize a target, in the looted laboratory of a dying alien scientist.[1] Kirk brought the device aboard the I.S.S. Enterprise NCC-1701 with the aid of an Orion smuggler, Juraav, whom he later killed.[2] Soon after installing it in his quarters, Kirk used the device to kill Captain Pike after engaging him in single combat[3] and assumed command of the Enterprise with Spock as his first officer. Thanks to the device, Kirk developed a reputation as someone whose enemies simply disappeared. When Kirk traded places with his counterpart from another universe in 2267, the other Kirk was saved when Kirk's woman, Lieutenant Marlena Moreau, used the device to prevent an assassination attempt on the captain, not yet realizing that the two Kirks had switched places.[1]

During an attempted invasion of the United Federation of Planets on Stardate 8216.4, Captain Kirk seized control of the U.S.S. Excelsior NX-2000, and Admiral Kirk managed to escape and beamed to the Enterprise. Captain Kirk remotely activated the Enterprise's self-destruct system,[4] and although the drive section was destroyed, Admiral Kirk and his crew managed to disarm the explosives on the saucer. Separating the saucer at the last moment, they were able to catch Captain Kirk off guard, and using the Tantalus Device, retook the Excelsior.[5]