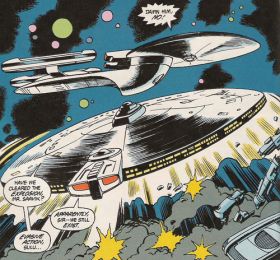 During an attempted invasion of the United Federation of Planets on Stardate 8216.4, Captain James T. Kirk boarded the U.S.S. Excelsior NX-2000.[2] Although Captain Kirk seized control, Admiral Kirk managed to escape and beamed to the Enterprise. Taking control of the Enterprise, Admiral Kirk fought Captain Kirk in the Excelsior, who used the ship's computer to remotely activate the self-destruct system.[3] The Enterprise's drive section was destroyed, but Admiral Kirk and his crew managed to disarm the explosives on the saucer. Separating the saucer at the last moment, they were able to catch Captain Kirk off guard, and using the Tantalus Device, retook the Excelsior.[4] 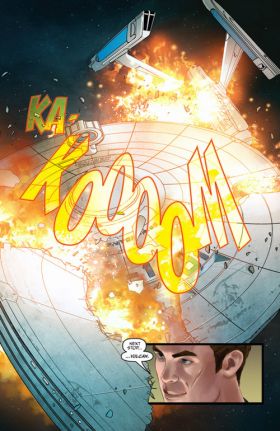 Shortly after the conquest of Qo'noS ended the Klingon War, the Imperial Starship Enterprise, a Constitution class battlecruiser commanded by Captain Spock, was destroyed by the Narada, which had come under the control of Commander James T. Kirk, first officer of the Enterprise.[5] The [[