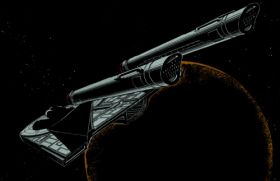 On Reference Stardate 2/0702 (February 2207), the Federation Starship Acropolis, a Derf class repair tender, responded to signals from a malfunctioning marker buoy. As its shuttle neared the beacon. a Klingon warship appeared and opened fire before defensive actions could be taken. The volley crippled the Acropolis' engines, and the tender was boarded and towed into Klingon territory.[1] Intelligence later discovered that the beacon had been sabotaged by Klingon operatives to entrap the repair tender.[2] It is theorized that the Klingons gained technical information concerning robotics and repair techniques that they lacked, but it is not known just what gain this action brought them in the overall situation. Some analysts believed that study of the robotic repair systems could make it possible for Klingons to alter the functioning of navigation beacons robotically, creating potential havoc in border space lanes.[1]