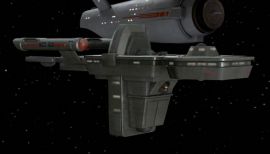 The Federation Starship Antares was the prototype vessel of the Antares class. The crew of the Antares, which had been outfitted as a science vessel,[1] rescued Charlie Evans from planet Thasus in 2265. Commanded by Captain Ramart, the ship was destroyed when Evans caused a baffle plate on their warp core to vanish.[2] Named for the brightest star (as seen from Earth) in the constellation Scorpius.[1]