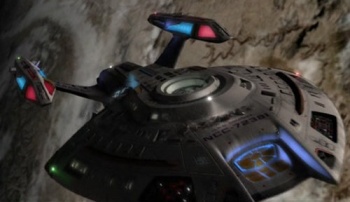 The Federation Starship Equinox, a Nova class heavy scout commanded by Captain Rudolph Ransom III, disappeared in 2370 near the Burke Expanse while on a mapping mission in the Badlands. The Equinox, unknown to Starfleet at the time, was abducted to the Delta Quadrant by the Caretaker. In 2375, the Equinox, after surviving for several years in the Delta Quadrant, encountered the U.S.S. Voyager NCC-74656, which also was pulled into the quadrant by the Caretaker in 2371.[2] When the full extent of the Equinox crew's actions over the past several years came to light, the two ships came into conflict, and the Equinox was ultimately destroyed.[1]