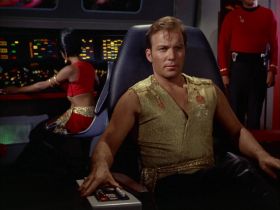 A fine example of advancement in the Terran Empire's Starfleet was Captain James T. Kirk, commanding officer of the I.S.S. Enterprise NCC-1701.[1] On Stardate 1299.7 in 2265,[2] Kirk became captain of the Enterprise after assassinating Captain Christopher Pike.[1]

One of Captain Garth’s early proteges, the young Lieutenant Kirk used his mentor’s influence to arrange an assignment aboard the I.S.S. Farragut NCC-1647 in 2254, immediately following his graduation from Starfleet Academy. Kirk served aboard the Farragut for three years until 2257, when Captain Garrovick was killed by a mysterious “vampire cloud” creature near Tycho IV after Lieutenant Kirk “hesitated” to fire the ship’s phasers against the creature. Kirk moved up in rank to Lieutenant Commander following the Tycho incident and arranged to be assigned to the I.S.S. Enterprise, under the command of Captain Christopher Pike, where he made the acquaintance of Lieutenant Spock, a junior science officer.[3]

By 2265, Kirk was Pike’s first officer.[1][4] While on a landing party, Kirk discovered the Tantalus Device, which allowed its operator to remotely vaporize a target, in the looted laboratory of a dying alien scientist.[1] Kirk brought the device aboard the Enterprise from the I.S.S. Buchanan with the aid of an Orion smuggler, Juraav, whom he later killed.[4] Soon after installing it in his quarters, Kirk used the device to kill Pike after engaging him in single combat[2] and assumed command of the Enterprise with Spock as his first officer.[1][2] Kirk went on to use the Tantalus Device to make his adversaries disappear under mysterious circumstances.[1]

The early missions of the Enterprise proved both successful and profitable for Kirk and his crew. Kirk put down rebellions on the Vega IX colony and Gorlat. The Enterprise raided into Romulan space, providing a necessary show of force against the Romulan Empire. In 2266 Kirk executed Chief of Security Ben Finney for plotting against him; Lt. j.g. Hikaru Sulu assumed Finney’s rank and position.[3]

Kirk fathered James T. Keeler during an incident in which he was accidentally thrust back into the 1930s. He saved Edith Keeler from her destined death in an automobile accident and then told her the century’s future history, so that he and she could rule together. Although Kirk’s crew thwarted his plans for world domination by rescuing him from his temporal marooning, Keeler used the information he’d given her to seek out the great men of history and bend them to her will.[3]

Shortly after Finney’s execution, Lt. Commander Spock seized control of the Enterprise and directed it on a course for the forbidden planet of Talos IV, after imprisoning Captain Kirk and Commodore Mendez of Starbase 11. This "mutiny" was actually a ruse by Spock and Kirk to allow the Enterprise to approach the planet and bombard it, in order to destroy the Talosians, whose power of mental illusion posed a threat to the Empire. For his actions, Spock was promoted to the rank of Commander and both men earned medals from the Empire.[3]

Kirk ended the conflict between Eminiar VII and Vendikar by bombarding both planets until they were forced to surrender to the Empire. He also dealt with a threat to Imperial mine workers on Janus VI by capturing the silicate creature stalking them, seizing its eggs for study. He put down a minor Klingon incursion on Organia before the Klingons could land on the planet. Kirk also oversaw the conquest of Gamma Trianguli VI and Cordian as new subjects of the Empire.[3]

In 2266, a freak transporter accident caused him to temporarily trade places with his counterpart from another universe.[1]

In several timelines that spawned from that incident, upon his return, Kirk was immediately killed by Spock, who had been influenced by the visitors from the other universe;[3] in others, Spock waited years before making his move;[5] in still others, Spock did nothing.[6]

Upon his return, Kirk was placed in the brig with Sulu while Spock conferred with Starfleet Command regarding how to proceed, given the unusual circumstances of the incident. Admiral Decker and the I.S.S. Constellation NCC-1017 were dispatched to personally handle the matter, but before Decker could arrive, Kirk and Sulu engineered an attack on Spock that coincided with an attack by a Klingon attack force. Spock, having already ordered Lieutenant Commander Scott to fully integrate the Tantalus Device into the ship's systems, used the device to drive off the Klingons. Just as that crisis was averted, Kirk attacked Spock on the bridge. The pair were caught in an explosion at the communications console, which Ensign Chekov had rigged to kill Lieutenant Uhura. The explosion wounded Spock, and killed Kirk.[7]

Kirk led an attempted invasion of the Prime Timeline in 2285,[8] but he was not only stopped by his counterpart, he and his entire crew, with the exception of Spock, were killed by the Imperial Starfleet, which had labeled them traitors following the interference of their counterparts.[9]

In this timeline, in which Kirk was not immediately killed, he used the Tantalus Device to make his way up through Imperial politics, eventually declaring himself Emperor Tiberius.[5] He later survived an assassination attempt by Spock, but was driven from power and went into hiding for nearly a century. Upon his reemergence, he attempted an invasion of the GN22 Timeline, but was thwarted by his counterpart and Captain Jean-Luc Picard in that reality.[10]