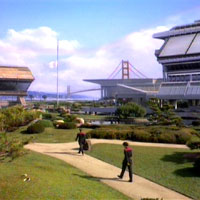 An institute of higher learning and training facility for Starfleet officer candidates,[1] Starfleet Academy was founded in 2161 with the motto, "Ex astris, scientia," a Latin phrase that translates as "From the stars, knowledge."[2] Modeled after military academies from throughout Earth's history, the Academy, located at The Presidio[2] in San Francisco,[3] classified its cadets[2]— or midshipmen, in naval parlance[3]— with rankings based on class seniority.[3] Although admission to the Academy was open to non-Federation citizens, they required a letter of recommendation from a senior Starfleet officer, such as when Nog, a Ferengi, wished to apply in 2371.[4]

Starfleet Academy cadets in the 24th century were typically organized into squads of approximately a half-dozen cadets.[5] Although each squad was officially equal, the cadets in Red Squad were generally held to be the Academy's elite students. Members of Red Squad received their own dormitory, as well as other privileges, in addition to special training.[6] Because of this elite status, many cadets, including Nog[7] and his fellow Omega Squad cadet Matt Decker,[8] aspired to become part of Red Squad.