From Trekipedia
(Redirected from Andor)
Jump to: navigation, search
Andoria 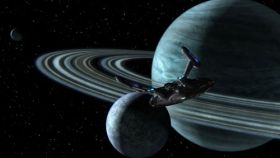 A cold world with relatively few natural resources, Andoria (sometimes called Andor[7]) nevertheless gave rise to an advanced civilization that played a key role in galactic events. Not a planet, Andoria was actually a moon[4][8] of the eighth planet in the Procyon system in the Andorian Sector (aka Sector 006) of the Beta Quadrant,[9] a ringed Class J gas giant[4] named Olith.[5][10]

Unquestionably, Andoria was cold. Orbiting a Class J gas giant[4] at the outermost edges of the Procyon system, it was an extreme example of a Class M world.[9] Without the heat generated by Andoria's core, which manifested itself on the surface in the form of volcanoes and volcanic rifts, the world might not have developed life at all. An estimated 85 percent of all the animal life on Andoria lived within 15 degrees latitude of the equator.[5]

These relatively temperate zones had a climate similar to the taiga zones on Earth. Long, cold seasons were interrupted by brief but warm summers.[3][4] The warmer conditions, coupled with the heavy summer tourist season, made summers the least favorite time of year for many Andorians.[3] In the 22nd century, the temperature rose above the freezing point of water only a few weeks at a time in some zones, which was considered a heat wave. Andorian cities were built underground to take advantage of geothermal energy.[4]

Dense forests covered much of the Andorian landscape. Trees similar to the redwoods and sequoias of Earth—their blue color notwithstanding—numbered among Andoria's most prominent species of trees. The coloration of the trees, like that of most of the moon's lifeforms, had a blue tint that ranged from the deep blue-green leaves of the deciduous trees along the equator to the vibrant blue of the mountaintop conifers more common near the arctic regions. The Andorian Blue Taiga, known for its brilliant azure hues, made for a popular tourist destination that rivaled the national parks of Earth in beauty and majesty.[3] Andoria was the homeworld of the Andorians, a species distinguished by their blue skin, white hair and antennae.[2] The planet was also host to an Andorian subspecies called the Aenar, who lived in isolation from the rest of their world. The albino Aenar were blind but strongly telepathic.[4] Also native to the planet was a flying mammal called the Redbat.[11]

Andoria's water had relatively high concentrations of cobalt, which accounted for the high levels of the heavy metal in Andorian blood. The presence of cobalt also made Andorian water mildly toxic to Humans unless it was first purified. While Humans could comfortably breathe the Andorian atmosphere for short periods of time,[4] prolonged exposure to the moon's thin atmosphere left many fatigued. As a result, Andorian architects typically outfitted Federation and Starfleet buildings with atmospheric conditioners that could create an earthlike atmosphere.[3] 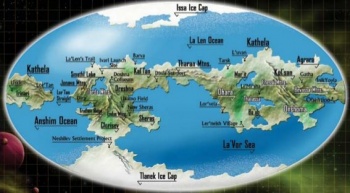 Andoria's landmass was divided into four continents: Issa, Ka'thela, Tlanek, and Voral. Issa and Tlanek were both frozen solid and inhospitable, covered at virtually all times by glacial ice sheets that could be hundreds of meters thick. Nearly all of Andorian civilization resided on the continents Ka'thela and Voral, which were joined by a thin strip of land that contained the Tharan Mountains. Historically, this served as Andoria's most important overland trade route.[5]

Clans, or kethni, formed the basic structure of Andorian society.[3][5] A strong chieftain ruled each keth, typically having gained the position through ritual combat, although in some cases the position was passed by heredity.[3] Originally, kethni were huge, extended families and confederations of family units related to one another by blood. As Andoria entered its Industrial Age and families were less likely to stay tied to the same location long enough for traditional clan ties to solidify, the definition of kethni changed to include clans based on economic, professional, or ideological grounds. Kethni also came to represent groups based on the common interests of their members. Even so, these newer kethni commanded the same loyalty from their members as that shown to the old family-based clans.[5] Together, the leaders of the three hundred largest clans form the Kethni Council, the unified world government which came into being following the reforms instituted by Lor'Vela in the wake of the Age of Lament.[3][5] Officially, each of the clan leaders was equal to every other leader, but in practice, several clan leaders wielded more power due to the strength and influence of their clans, the alliances they shared with other clans, and also due to their own personal age and experience.[3] In the 2360s and 2370s, the most powerful member of the council was Trallex Kor, the eldest clan leader in the council and the leader of Clan Kor, the strongest and most powerful clan on Andoria.[3]

Although Andoria never wavered in its commitment to the Federation, the Kethni Council maintained Andoria's autonomous military force—the Andorian Imperial Guard (renamed the Andorian Defense Forces following the formation of the Federation)—as well as its own intelligence service, the Am Tal, or "Seeker of Secrets." The Am Tal was so secretive, the Federation knew of it only through rumor, and its mandate was to ferret out information—be it political, military, or economic—that would help the Andorian government and track the activities of kethni that had been censured by the Kethni Council. Am Tal operatives worked under deep cover, and were recruited from all walks of life. They continued to lead their daily life while secretly helping the organization gather information. The existence of the Am Tal was controversial, but also represented a romanticized ideal of modern-day Andorian warriors, fighting the good fight against Andoria's enemies.[5]