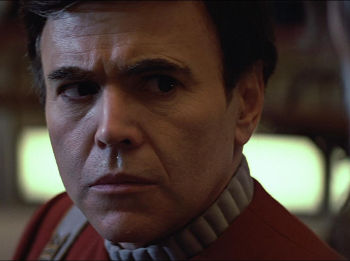 Chekov enrolled at Star Fleet Academy in 2198. While at the Academy, he became involved with a fellow cadet, Irina Galliulin,[2] who dropped out in 2201.[4] Chekov graduated from the Academy a year later, and his first assignment was to the Monoceros class scout U.S.S. Leo Minor NCC-614, as an assistant navigator.[4]

After the end of the Enterprise's Five-Year Mission in 2212,[10] Chekov was assigned to the Larson class[11] U.S.S. Nelson NCC-1843 as Chief Navigator.[4] When the Enterprise completed its refit and was set to return to duty in 2217, Chekov returned to the ship, now as Chief of Security, just prior to the V'Ger incident.[12]

In 2222, Chekov received a promotion to Commander and a transfer to the Reliant class light cruiser U.S.S. Reliant NCC-1864 as First Officer under Captain Clark Terrell. The ship was tasked to support Project Genesis, and after several months, they encountered the exiled Khan Noonien Singh. Khan seized control of the Reliant and used Ceti Eels to control Terrell and Chekov. Khan was ultimately defeated by the Enterprise, and the Reliant was destroyed.[8]

Chekov returned to serve aboard the Enterprise[13] until it was destroyed at the newly-formed Genesis Planet.[14] Chekov and the rest of the Enterprise crew were reassigned to the U.S.S. Excelsior NX-2000 shortly after thwarting an attempted invasion by their counterparts from the Mirror Universe.[15] After a few short months, however, circumstances forced their return to "exile" on Vulcan,[16] which ended during the Cetacean Probe incident.[9]

Following that incident, the crew was reassigned once again to the newly-commissioned U.S.S. Enterprise NCC-1701-A in early 2224.[9]