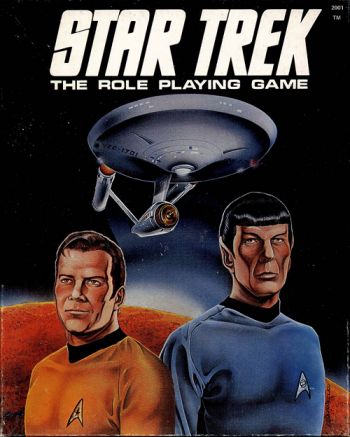 This book sets up the basics of Star Trek: The Role Playing Game, including rules, character creation, and basic background information about the Star Trek universe.

This book includes three detailed game scenarios: "Ghosts of Conscience," "Again, Troublesome Tribbles," and "In the Presence of My Enemies."

Stardate 7662.4 / Reference Stardate 2/1104:[Notes 1] The U.S.S. Enterprise is ordered to assist and recover vital data from the U.S.S. Hood NCC-1703, which has become trapped in a spatial interphase.

Stardate Unknown / Reference Stardate 2/1109:[Notes 1] The U.S.S. Enterprise NCC-1701 is ordered to close Genetics Research Station 17 on the planet Aleph III, near the Klingon Neutral Zone, and to retrieve all personnel and data. Once there, the crew discovers Cyrano Jones, Tribbles, and a Klingon raiding force led by Captian Koloth.

In the Presence of My Enemies

Stardate Unknown / Reference Stardate 2/1202:[Notes 1] Federation Ambassador Carlos Luis Rivera, a senior diplomat, is called in to help persuade the Lorealyn system to join the Federation. Lying within the Klingon Neutral Zone, the system possesses important crystal deposits that could be valuable for experiments in transwarp propulsion. The Mission class courier U.S.S. Magnan NCC-13843 transports the ambassador, but is intercepted by a Klingon D-7 class cruiser. Ambassador Rivera and his party are taken aboard the cruiser, where they are temporarily imprisoned.

Stardate 8212.17: This book provided information on the Constitution class cruiser and the D-7 class battlecruiser, as well as deck plans for each.