From Trekipedia
Jump to navigation Jump to search
Winona Kirk 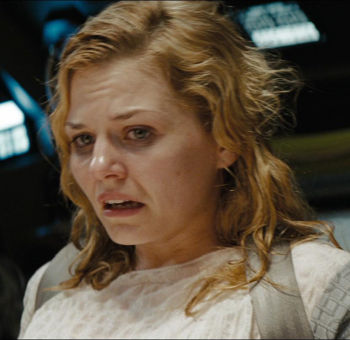 A Human Starfleet officer, Winona Kirk was married to Lieutenant Commander George Kirk, and in 2233 the pair were assigned to the U.S.S. Kelvin NCC-0514 under Captain Richard Robau.[1] Winona and George's two sons were George Samuel and James Tiberius,[2] and in 2233, James was born aboard the Kelvin.[3] Winona had a brother, Frank Davis.[4]

On Stardate 2233.04, the Romulan ship Narada emerged from a singularity that had transported it 154 years into its past. The Narada immediately attacked the Kelvin, sending Winona, who was pregnant with the couple’s second child, James, into early labor. George was killed in the attack, sacrificing himself aboard the Kelvin so that the crew—including his wife and newborn son, who were aboard Medical Shuttle 37—could escape.[1] Winona remained in Starfleet, and her duties sometimes separated her from her sons, James and George Samuel, whom she would leave in the care of her brother, Frank Davis.[1][5][6]