From Trekipedia
Jump to: navigation, search
Prev: "Charlie X"
Star Trek, Season 1, Episode 8
Next: "What Are Little Girls Made Of?" 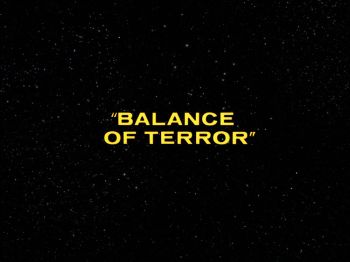 After attacking an outpost, Romulans battle the Enterprise.

The Enterprise is patrolling along the Romulan Neutral Zone, a border between the Federation and the Romulan Star Empire. As Captain Kirk is performing a wedding ceremony for crewmembers Angela Martine and Robert Tomlinson, an outpost along the border announces that it is under attack from the Romulans. Kirk witnesses the destruction of the outpost, but is helpless to assist. The Romulans have perfected an invention that renders their ships invisible, and Kirk reasons he must overtake and destroy the enemy vessel before it can return home. To the surprise of all, transmissions intercepted from the Romulan ship reveal that they look almost exactly like Vulcans, which causes Lieutenant Stiles to express his distrust of Spock. When the Romulan Commander is finally cornered, he destroys his ship rather than surrender—and Stiles, whose life was saved by Spock, realizes his prejudicial attitude is wrong.

Prev: "Charlie X"
Star Trek, Season 1, Episode 8
Next: "What Are Little Girls Made Of?"