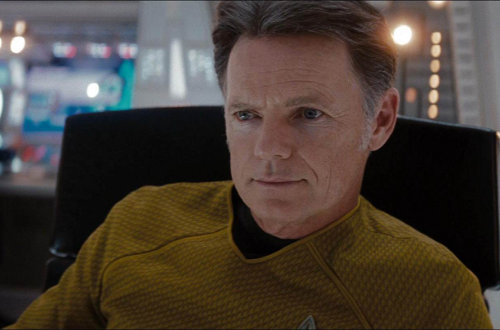 Christopher Pike was the first captain of the Federation Starship U.S.S. Enterprise NCC-1701, and oversaw its construction for several years prior to its launch on Stardate 2258.42.

While a cadet at Starfleet Academy, Pike wrote his dissertation on the circumstances surrounding the destruction of the U.S.S. Kelvin NCC-0514 by a Romulan vessel on Stardate 2233.04. By 2255, Pike was serving at the Academy while overseeing the construction of the Enterprise at the Riverside Shipyard in Iowa. It was there that he met a young man named James T. Kirk—the son of George Kirk, who had died while saving the lives of the Kelvin's crew—and he convinced Kirk to join Starfleet as well.

Three years later, Pike was captured by Nero—the same Romulan responsible for the destruction of the Kelvin—shortly after the Enterprise was launched. After Nero destroyed the planet Vulcan, he tortured Pike for information on Earth's defenses. Pike was rescued by Kirk and Spock, but had been severely injured as a result of Nero’s torture. Upon returning to Earth after Nero's defeat, Pike was promoted to the admiralty and was succeeded by Kirk as captain of the Enterprise.[1] Following the bombing of a secret Section 31 facility in London in 2259, Pike was attending an emergency meeting of Starfleet Command at Starfleet Headquarters. That meeting was also attacked, part of a plan by Khan Noonien Singh to seek revenge against Starfleet and Section 31 for actions taken against him. Admiral Pike was killed in the attack.[2]