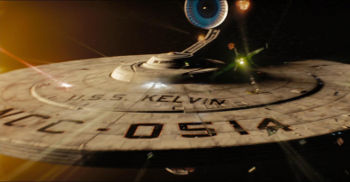 The Kelvin Timeline was an alternate reality created by an accidental temporal incursion by the Romulan miner Nero. After inadvertently traveling through an artificial black hole from 2387 to 2233, Nero's ship, the Narada, destroyed a Starfleet vessel that was investigating the anomaly, the U.S.S. Kelvin NCC-0514.[1] The incident, and sensor scans of the Narada taken by the Kelvin survivors, led to significant leaps forward in Federation technology.[2] The Narada was soon captured by Klingon forces, who studied the captured ship until 2258, when Nero and his crew escaped from Rura Penthe. This also led to significant advances in Klingon technology.[3] In a further significant change to the timeline, the Narada successfully detonated a red matter device within the core of Vulcan, destroying the planet and killing billions of Vulcans.[1]

This category has the following 2 subcategories, out of 2 total.