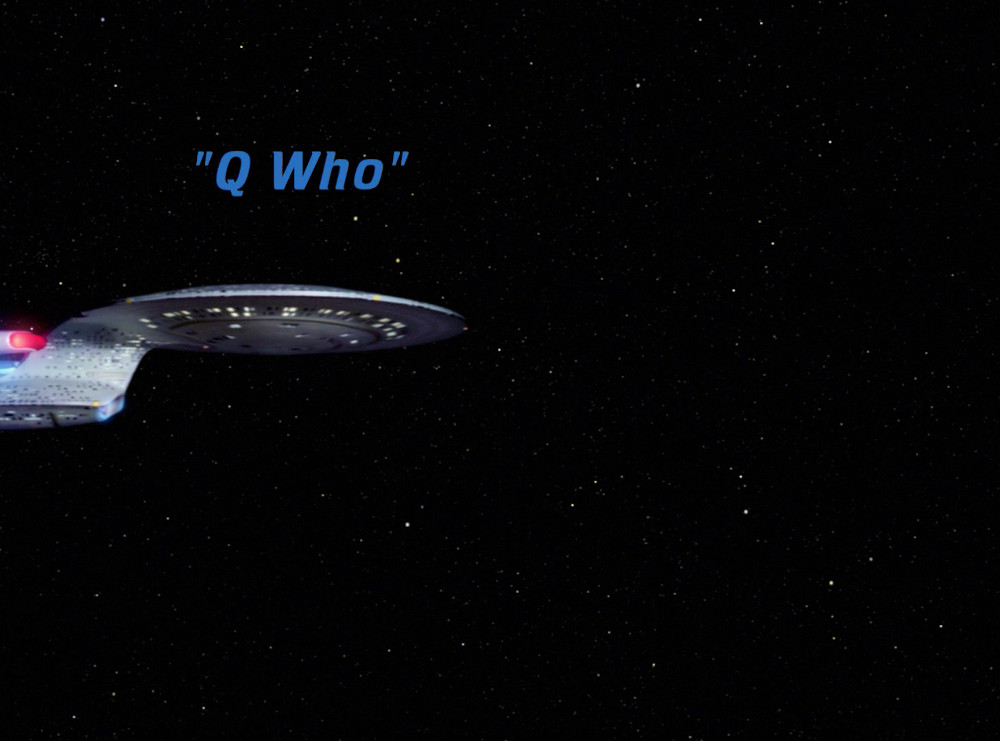 Stardate 42761.3: Q hurls the Enterprise across the galaxy and into the path of the Borg

On the edge of Federation space, the Enterprise encounters its old nemesis, Q, whose anger at being refused a crew post leads him to hurl the ship hundreds of light years away, to the edge of the Delta Quadrant. There, they encounter a new threat — the Borg. As the ship discovers planet after planet ravaged like those in the Neutral Zone months earlier, whose destruction was first blamed on the Romulans, Guinan — an old foe of Q as well — tells Captain Picard of the Borg's deadly attacks on her people.

Suddenly, two Borg drones beam over from their cube-shaped ship to download information from the ship's computer, ignoring the crew and quickly adapting to phaser attacks. Their vessel then locks onto the Enterprise and slices out a section of the saucer, killing eighteen people. A brief skirmish leaves the Borg cube damaged, and Riker takes advantage of the lull to lead an away team over to the cube. What they find is a half-humanoid, half mechanical race with a hive mind intent only on destruction and acquiring new technology. They also find that the Borg ship is regenerating itself.

Sure enough, the fight resumes and the Enterprise is soon on the brink of defeat, its shields and warp drive gone. Picard admits to a gloating Q that Humans can't yet handle all that the cosmos might yield — that he needs Q's help. Satisfied, the superbeing returns the Enterprise to its previous location, and vanishes. Later, a reflective Picard confesses to Guinan that the near-fatal Borg encounter may have been just the jolt that a complacent Federation needed.