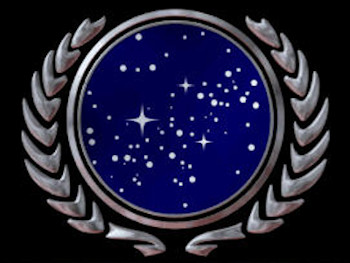 The United Federation of Planets was comprised of hundreds of regional governments controlling thousands of planets across a large spectrum of space. The Federation was one of only a few major political units that included several races (Humans, Vulcans, Orions, Andorians, Rigelians, Alpha Centaurians, Cygnans, etc.) on the ruling council. Two dozen other races were established as affiliate members. Colonies and bases were established on around a thousand other planets. Most ships had a domination of one particular race with about 10% of the crew being a mixture of other races.

Humans were the dominant race in the Federation, as they provided more than 70% of Star Fleet personnel and were key players in every phase of its operations. Humans were regarded as the most militaristic, but not the most warlike, of the member races in the Federation.

The Federation was probably the most idealistic of all the empires, and was more interested in scientific exploration than conquering the galaxy. Unfortunately political situations almost always ensure hostilities with one or more of their neighbors. Federation ships never attacked without warning, and while the Federation fought wars with all of the bordering races, it never started one. The Federation eventually negotiated boundaries with all of its neighbors and never sought to expand them militarily.

Federation ships were well balanced, with strong hulls and powerful weapons that were most effectively used in delivering large amounts of damage to an enemy ship in a short period of time. Numerous high-quality phasers, along with slow-charging but powerful photon torpedoes, were standard on most ships.