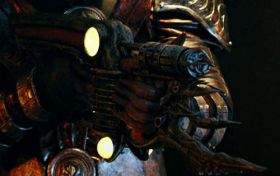 The disruptor was a common Klingon personal weapon that used a microwave beam to disrupt the structure of living tissue or (at higher power levels) any solid matter. Early models used focused sound waves instead of microwaves, but such "sonic disruptors" were considered outmoded as the Empire expanded into space. (As sound cannot travel through a vacuum, "sonic" disruptors were never used as spacecraft weaponry. Even so, the focused microwave version was sometimes erroneously referred to as a "sonic" disruptor.)[1]