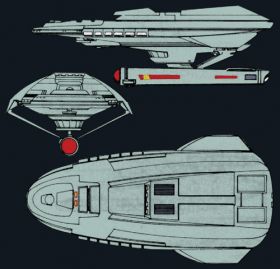 The Aakenn class freighter entered service on Reference Stardate 1/9610 (October 2196),[1] during the Four Years War. During the war, the class was used to move personnel and materiel to the front and supplies to the rear to keep the Federation's wartime production at high levels. Decades later, the class was still a common sight on the spacelanes, with thousands converted over for commercial service. Star Fleet used its more than 100,000 metric tons of capacity to move all sorts of materials to the outer reaches of the Federation; because the class wasn't capable of landfall, cargo needed to be containerized and beamed aboard via the vessels' eight cargo transporters. Additionally, the Aakenn class had staterooms for up to six passengers; though not designed for luxury, these small accommodations were nonetheless reasonably comfortable.[2]