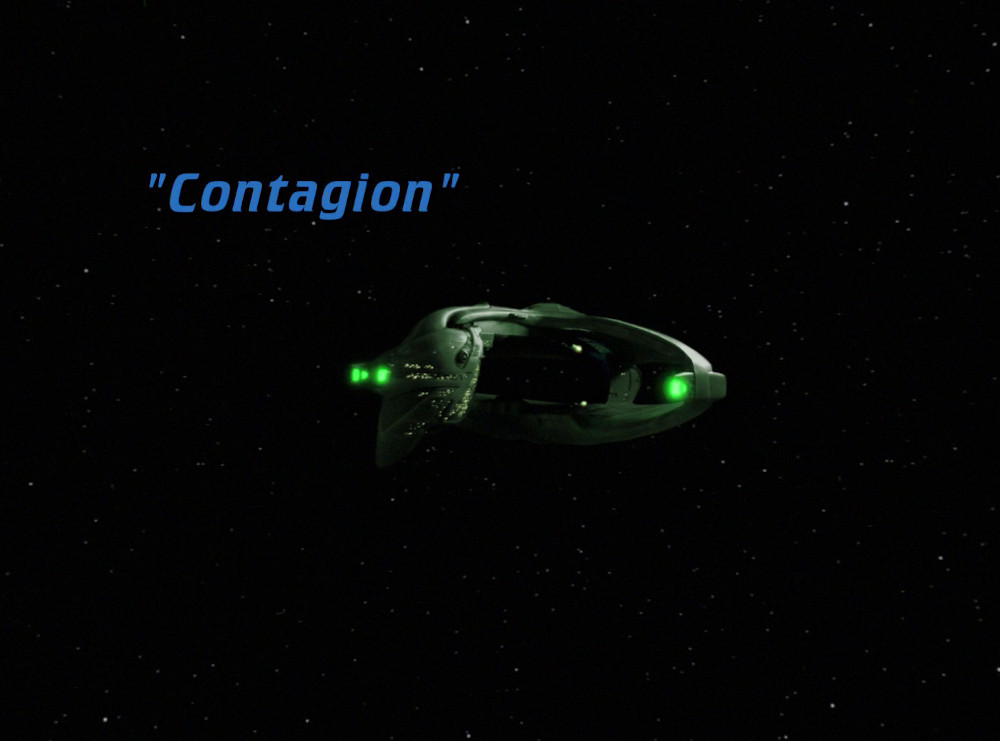 Stardate 42609.1: The Enterprise computer is infected by an alien virus

Crossing the Neutral Zone to answer a distress call from the U.S.S. Yamato, the Enterprise arrives in time to see widespread computer malfunctions destroy its sister ship. When log recordings from the Yamato reveal that its captain, Donald Varley, had tracked the mythical planet Iconia to this location, Captain Picard has his ship trace the Yamato's course: discovering the secrets of the extinct Iconian civilization would be worth the risk of an encounter with the Romulan Star Empire. But after the same computer malfunctions begin to plague the Enterprise, La Forge realizes that an Iconian probe's energy burst infected the Yamato with a virus that rewrote the ship's control software, and by downloading the Yamato's logs, the Enterprise is now infected as well.

A desperate Picard beams down with Worf and Data to a control tower on long-dead Iconia, where they discover an Iconian Gateway. There, Data becomes infected with the Iconian virus as well. Meanwhile, the crew is forced to raise shields and strand the away team when a Romulan warbird suddenly attacks. But Riker soon learns that the Romulan vessel is also crippled by the virus. Picard decides to destroy the control tower and the remaining Iconian probes, but first returns Data and Worf to the Enterprise through the gateway. Once Data arrives back aboard, his self-correcting functions eradicate the virus in his system, inspiring La Forge to find a similar solution for the Enterprise. The ship regains transporter capability in time to rescue Picard, only to find he has used the gateway to travel to the Romulan ship. The Romulans accept the solution to the virus without comment.