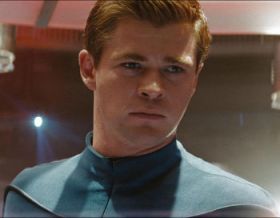 In 2233, Lieutenant Commander George Kirk[3] was the first officer[1] of the U.S.S. Kelvin NCC-0514 under Captain Richard Robau.[3] Kirk was married to another Starfleet officer, Winona (Davis) Kirk, and they had two sons, George Samuel[4] and James Tiberius. Kirk was born in Riverside, Iowa,[1] and was the son of Tiberius Kirk, whose name he felt was "the worst."[3]

In 2242, six months into the construction[5] of the NX-0002, which would be commissioned three years later as the U.S.S. Enterprise NCC-1701,[6] Captain Robert April took the ship's empty hull on a secret mission to retrieve a lost colony vessel, the S.S. Rosenberg, which was trapped in an ion storm. April hand-picked a command crew he could trust, including his oldest friend George Kirk and April's future wife, Sarah Poole. While underway, sabotage threw the Enterprise into the Romulan Neutral Zone, and nearly sparked another war with the Romulan Star Empire. With some assistance from a defecting Romulan, April and Kirk managed to defuse the situation and rescue the colonists.[5]

On Stardate 2233.04, the Romulan ship Narada emerged from a singularity that had transported it 154 years into its past. The Narada immediately attacked the Kelvin, pausing only to allow Captain Robau to travel over to the more advanced ship via shuttlecraft. The Romulans pressed him for information, but when it became clear that they had traveled through time, their captain, Nero, killed Robau and resumed the attack. Kirk found himself unexpectedly thrust into command; outgunned and overwhelmed by the incredibly advanced ship, Kirk ordered the evacuation of the Kelvin, but when the autopilot was destroyed, he was forced to sacrifice himself in order to manually pilot the ship onto a collision course with the Narada, protecting the escaping shuttles for as long as he could. Meanwhile, his wife Winona, who was pregnant with the couple’s second child, James, went into early labor during the attack, giving birth aboard Medical Shuttle 37. Kirk kept a channel open to the shuttle; before he died, he heard his newborn son’s first cries, and he helped his wife name the boy mere seconds before the Kelvin rammed the Narada.[3] Kirk had owned a classic Chevrolet Corvette, and left it to his brother-in-law, Frank Davis.[9][10][11]