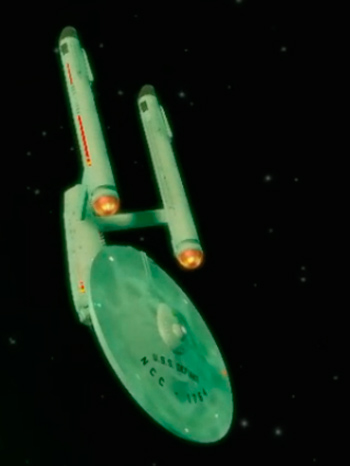 The Federation Starship Defiant, a Constitution class cruiser,[1] was constructed at Tranquility Base, Luna.[2] During the Klingon War of 2256-2257, the Defiant and her Constitution class sister ships were largely redeployed away from the fighting.[3]

In 2268, the Defiant answered a distress call from a Tholian colony fleet in the Murasaki 242 protonebula. The Defiant soon found itself outmatched by a Na'kuhl fleet that had traveled back in time in an attempt to spark a war between the Tholian Assembly and the Federation. Aided by the U.S.S. Pioneer NCC-1500, which had also traveled back in time from 2270, they were able to prevent a war, but not to save the Tholians. When the Tholian mothership rammed the Na'kuhl dreadnought, the chronal energies released, coupled with the unique properties of the protonebula, caused an interphasic rift that trapped the Defiant.[4]

This interphase had an adverse effect on humanoid neurophysiology and caused mass insanity among the crew. Captain Gil Morrison managed to get a distress call out to the U.S.S. Enterprise NCC-1701 before the crew succumbed to madness and started to kill each other. By the time the Enterprise arrived at the Defiant's location on Stardate 5693.2, three weeks had passed. The crew of the Defiant was dead, and the ship had been drawn deeper into the interphase rift. Interference from the Tholians prevented the Enterprise from retrieving the Defiant, and the ship was left behind. The Defiant was last seen shimmering, suspended between dimensions, until it faded into interspace.[1] 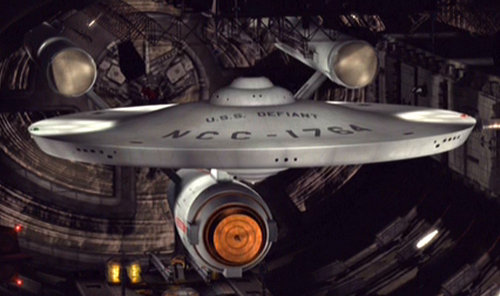 The interphase, however, was actually a rift between realities created by the Tholians of the Mirror Universe in 2155. The Defiant, after disappearing from its universe of origin, appeared in that universe and was taken by the Tholians to a drydock in the Vintaak system for study. Word of this eventually reached Commander Jonathan Archer, first officer of the I.S.S. Enterprise NX-01, who saw the ship as an opportunity to seize power for himself within the Terran Empire. He seized control of the Enterprise from Captain Forrest long enough to reach the Defiant. While Archer led a boarding party to the Defiant, the Enterprise was detected by the Tholians and destroyed.[2] Using the Defiant's advanced weapons, Archer was able to rescue most of the Enterprise crew and escape back to Imperial space, where it quickly became obvious that the balance had just tipped back in favor of the Empire in an ongoing civil war, led by Vulcans and Andorians who sought to unseat the Terrans in control of the Empire. The Defiant rendezvoused with an assault fleet, but discovered the I.S.S. Avenger NX-09 was the only ship remaining. Destroying the rebels, Archer then proceeded to assassinate Admiral Black, and decided he was going to use the ship from the future to overthrow the Emperor. The alien crew members on the Avenger, however, led by T'Pol and Soval—inspired by the Defiant's database, which described a United Federation of Planets in the other universe—convinced Dr. Phlox—the only remaining non-Terran aboard the Defiant—to disable the ship, allowing the Avenger to attack. However, the crew was able to restore the ship's systems and destroy the Avenger, killing Soval. Shortly after arriving at Earth, Archer was poisoned by Hoshi Sato, formerly the Captain's Woman to Forrest and an old flame of Archer's as well, who then declared herself empress.[5]

By 2257, after more than a century in the Mirror Universe, the Defiant had seen numerous modifications by the Terran Empire. The U.S.S. Discovery NCC-1031, while briefly stranded in that reality, downloaded information about the Defiant from the Terran Empire's computer networks, as well as secured files aboard the flagship of the Terran Starfleet, the I.S.S. Charon.[6][7]