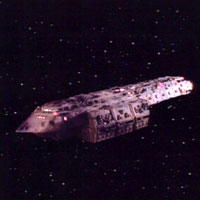 Inexpensive to produce and reliable, the Altair class was a medium-ranged transport vessel capable of moving small- to mid-sized cargoes and passengers to distant star systems. It was most often found in the possession of independent traders and merchants operating along the Federation frontier, and was a common sight along the spacelanes of the late 23rd century. Originally commissioned as a Starfleet transport, the Altair had a brief career in Starfleet before the class was decommissioned in favor of an alternate design, the Antares class. The Altair class proved to be reliable, but was easy prey for raiders and was underpowered for Starfleet's needs. In the commercial sector, however, the class was affordable, common, and easily repaired, which quickly made it the freighter of choice for merchant captains seeking their own fortunes.[1]

Constructed by the Gavor Shipyards on Tellar, this stocky cargo freighter was well-suited to delivering its cargo in a timely manner, thanks to the PB-1 Mod 1 linear warp drive used in its design. The Altair could transport its cargo at a sustainable speed of up to Warp 4, occasionally reaching Warp 5 for short durations when necessary. The PB-1 design, a proven engine in the field, was easy to maintain and repair for freighter crews. The SBE impulse drive was standard in a vessel of this size; it had a proven design, reliable construction, and used easily-replicated parts. The impulse thrusters were located directly aft, while the two warp nacelles flanked the sides of the vessel, recessed into cowlings off the main hull. The Altair came without armament, but integrated a minimal shield grid for protection against meteor showers, ion storms, and stellar anomalies. While the PFF design was older than the shield systems found on contemporary Starfleet starships, it did its job effectively.[1]

Foremost a cargo carrier, the Altair provided minimal accommodations for its crew of four and berthing for up to an additional six passengers; the cargo containers were not rated for humanoid transport. The two cargo storage bays ran underneath the dorsal spine down the centerline, off the primary hull. The Altair's bulky size made it unsuitable for entering a planetary atmosphere, so two industrial cargo transporters allowed the moving of cargo to and from the ship. At a drydock or bulk storage facility, the cargo bays were detachable, allowing the ship to easily pick up pre-configured containers and quickly be on its way. With enough consumables, the Altair could travel up to six months before requiring service. The recommended overhaul schedule was 15 years.[1]

More than a few captains made adjustments to their Altairs, a few even adding pulse phaser or disruptor banks, although the ships' power grid would be woefully overtaxed to power anything more powerful. Though the cargo bays were never certified for humanoid transport, this did not deter many Orions from using them to transport slaves.[1]

Many Altairs continued to serve well into the 24th century, although by this time they were notoriously slow and unreliable. Only the most desperate or unfortunate merchant captains continued to risk their careers on these vessels after decades of questionable maintenance schedules.[1]

As with many, if not most, vessels in the private or commercial sector, Altair class ships were typically named in honor of lost flames or longing loves.[1]