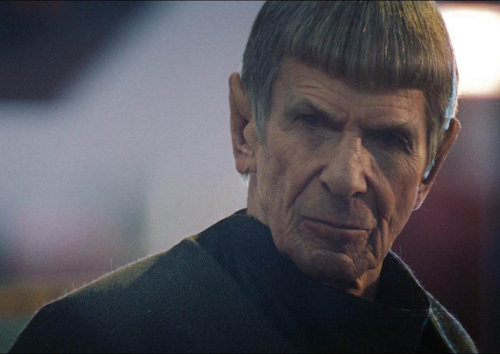 On 20 Tasmeen 8877 on the Vulcan calendar, or 2237 by the Earth calendar, Spock was nearly killed attempting to undergo a personal challenge prior to undertaking the traditional kahs-wan rite the next month. Traveling alone, save for his pet sehlat, I-Chaya, into the foothills of the Llangan Mountains on the edge of Vulcan's Forge, Spock was attacked by a le matya. He survived only due to the intervention of Selek, who was a cousin staying at his family's home in ShirKahr. Unbeknownst to Spock, Selek was actually Spock from the future, who had traveled back in time to prevent his own death, which had resulted in creating an alternate timeline.[6] His dedication to the Vulcan philosophy of logic prevented him from reciprocating the affections of Leila Kalomi when they met on Earth in 2261. When he was briefly under the influence of the pod plants' spores six years later on Omicron Ceti III, the two entered into a brief relationship, but it ended when Spock regained control of his mind and emotions.[7]

In 2254,[8] Spock served as science officer aboard the U.S.S. Enterprise NCC-1701 under Captain Christopher Pike.[9] Shortly after coming aboard, Spock and the Enterprise's first officer, Lieutenant Commander Una, were trapped in a malfunctioning turbolift, and the two officers discovered they had much in common.[10] Spock was wounded in an incident with the Kalar on Rigel VII shortly before an encounter with the Talosians on Talos IV, resulting in a slight limp.[9] After serving under Captain Pike for 11 years, command of the Enterprise transferred to James T. Kirk.[11] Spock continued on as science officer, as well as executive officer.[3] On Stardate 1512.2, Spock remarked that Commander Balok of the First Federation starship Fesarius reminded him "in some manner" of his father. When Lieutenant Commander Scott remarked "Heaven help your mother," Spock insisted that she considered herself to be "a very fortunate Earth woman."[4]

Spock, a master chess player, often found that playing against Captain Kirk was a challenge in both strategy and logic.[3] Spock programmed the Enterprise computer to play chess, and when that computer was altered to frame Kirk for murder, its inability to beat him served as an important clue to that fact.[12]