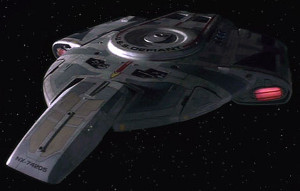 The Defiant class was developed at the Antares Fleet Yards in response to the Borg threat, following the Battle of Wolf 359 in 2366. The Defiant project, overseen by Admiral Batelle Toh of the Starfleet Advanced Starship Design Bureau (ASDB), began with the selection of an existing spacecraft design, which had just entered the initial systems-level review stage. The study vehicle, designated NXP-2365WP/T, had not yet been constructed, and the hull shape was undergoing warp field interaction simulations. The Borg threat drove a redesign of the pathfinder vessel,[1] though the basic design would be revised and used for the Nova class heavy scout.[4]

Specifically intended as a fast attack ship, the Defiant class incorporated a tough, no-nonsense design geared heavily toward high-warp penetration of defenses. Outside of combat, the class could perform escort, patrol, and reconnaissance duties, typically near a base of central operations. Following the end of the Dominion War, Defiant class heavy escorts continued to fulfill patrol and border duties, as well as close support assignments to a variety of fleets within Starfleet.[4]

ASDB engineers, including Lieutenant Commander Benjamin Sisko, who joined the development team at Utopia Planitia Fleet Yards following the Battle of Wolf 359,[3] decided to compact the planform by bringing the warp nacelles and other structures closer to the engineering hull, minimizing vulnerable appendages. The entire vessel was reduced to four decks; the warp nacelles were brought inboard to a minimum safe distance for field EM, and all EPS weapon power conduits were truncated to provide a nearly-zero lag time between activation signal and beam launch.[1]

The hull was surrounded with multilayer ablative armor, and the notched forward hull was equipped with a detachable pod consisting of the vessel's main sensor and navigational deflector, airlock module, and a last-resort matter-antimatter warhead. An integral set of ventral docking clamps and landing pads were also designed into the Defiant for possible planetary landings.[1]

The ship's bridge contained the typical complement of control stations, with the addition of a redundant tactical station designed to handle increased weapons system crew workloads. Twin isolinear computer processing cores were situated just aft of the bridge, on Decks 2 and 3. The Defiant class could operate on a single core, and could even retain some critical data from a damaged area through compression and scattered storage methods.[1]

The warp core was located in the aft of the engineering section, and spanned all four decks vertically. The matter-antimatter reaction assembly was embedded in Deck 3, with the surrounding systems balcony above on Deck 2. Antimatter was stored in a series of standard Starfleet antimatter pods on Deck 3, forward of the warp core.[1]

The Defiant class was equipped to perform highly detailed scientific missions, especially those with defensive concerns. While not outfitted for extended scanning and analysis tasks, the suite of onboard systems was well suited for much of the standard astrophysical, biological, and planetological sweeps and their accompanying data reduction. Most sensor systems aboard the class were optimized for reconnaissance and spacecraft combat maneuvers. The class carried a loadout of ten mixed Class 1, 3, and 5 probes, which could be supplemented with Class 8 and 9 torpedo-derived probes during starbase layovers.[1]

By far the greatest technological improvements incorporated into the Defiant class were its armaments, which included its ablative armor,[3] Type XII Pulse Phaser[4] cannons and Quantum torpedoes.[3] The class mounted four Pulse Phasers, located above and below the nacelle root attachments to the main body. The class also mounted five torpedo launchers; two faced aft from either side of the vessel on Deck 4, two faced forward, mounted within the upper nacelle section, while the fifth was mounted forward, in the detachable "warhead" section. The torpedo launchers were standard Starfleet designs, capable of handling a mixed loadout of Photon and Quantum torpedoes, as well as sensor probes.[1]

Additionally, the U.S.S. Defiant NX-74205 was the only Starfleet vessel equipped with a cloaking device, due to a special amendment to the Treaty of Algeron, intended to allow the Defiant to covertly gather data on the Dominion, which would then be shared with the Romulan Star Empire.[3]

The warhead section contained a separate miniature impulse engine and a magazine of six Photon torpedo warheads, which were also tied into the self-destruct system. The remainder of the autodestruct system consisted of sixteen additional Photon torpedo warheads, plus release commands for all safety interlocks on their matter and antimatter tankage.[1]

The Defiant class normally carries one primary and one backup Transporter on Deck 1. The modular unit includes a 45-percent scaled version of the standard pattern buffer tank and molecular imaging scanners found on larger starships. A somewhat larger cargo transporter was also located immediately aft of the warhead section, on Deck 3.[1]

The Defiant class was equipped with the standard suite of life support devices and supplies. While a Class M environment was maintained shipwide, three of the crew living quarters could be adapted for lifeforms from Class H, K, or L worlds. There were 22 main cabins and 10 contingency cabins, which were equipped with a minimum of two or as many as six bunks, for a potential crew total of 192; the normal operational crew was 40. Sickbay facilities were small, with space for four beds, though this was expandable to six, plus a limited surgical suite. Replicators were tied into the raw matter and recycling supplies, and were installed throughout the ship, including a pair in the wardroom.[1]

The Defiant class could carry up to four[1] small Type 18 Shuttlepods,[5] as well as a single Type 10 Shuttlecraft in its shuttlebay on Decks 3 and 4, which was capable of holding a single shuttle. The shuttlebay included an aft maintenance bay and ventral launch doors, and it could be isolated or protected with forcefields. The large central tractor beam emitter, mounted directly above the launch doors, was installed for both normal and emergency berthing functions; it was augmented by a series of 16 smaller docking beam emitters, which were designed for low-velocity vehicle translations. The class also mounted a number of lifeboats, scattered throughout the ship for emergency escape operations; these lifeboats were specially modified for low-observability and minimal EM signatures.[1]