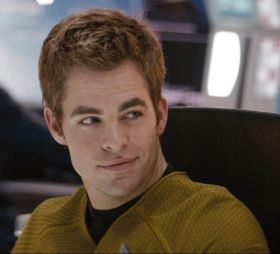 James Tiberius Kirk was born on Stardate 2233.04 aboard Medical Shuttle 37 as it made its escape from the U.S.S. Kelvin NCC-0514, mere moments before the Kelvin's destruction in a bid to stop a Romulan ship, the Narada, which had traveled back in time from the year 2387. Kirk’s mother, Winona, went into early labor due to the stress of the attack, and his father, George, was killed when he piloted the Kelvin into the Narada, disabling it long enough to allow the crew to escape in the shuttles.[1]

Kirk—named for both his maternal grandfather, James Davis,[1][2] and his paternal grandfather, Tiberius—and his older brother, George Samuel Kirk, were raised by their mother after the Narada incident.[1] Kirk grew up in rebellion, particularly against his Uncle Frank Davis,[3] who took the boys in when his sister Winona’s Starfleet career took her away from Earth,[4] going so far as to drive a Corvette that had once belonged to his father[3] over the edge of a nearby quarry.[1]

By the time he was twenty-two years old, Kirk had made something of a reputation for himself as "the only genius-level repeat offender in the Midwest," according to Starfleet Captain Christopher Pike.[1] Pike had a sobering influence on Kirk, however, who was convinced to join Starfleet the next day, boasting that he would complete the four-year course at Starfleet Academy in just three years.[1] Kirk’s tenure at the Academy was anything but uneventful. Within weeks after becoming a cadet, Kirk helped discover the identity of a suspected serial killer, which turned out to be an advance scout for the Borg that was gathering genetic data on Earth.[5] Not long thereafter, Kirk assisted his friend and fellow cadet, Leonard "Bones" McCoy in uncovering a ring of cadets using performance-enhancing drugs to stay competitive at the Academy.[6] During his tenure as a cadet, Kirk made a number of other friends and acquaintances, including Nyota Uhura,[1] Gaila,[1] Gary Mitchell,[7] and Lee Kelso.[7] His closest friend, however, was McCoy, a young, recently-divorced doctor who’d also joined Starfleet at the same time as Kirk.[1]

By 2258, Kirk was in his third year, and his frustration with the "no-win" Kobayashi Maru scenario prompted him to take the test an unprecedented three times. On his third attempt, however, Kirk managed to reprogram the simulator, allowing him to beat the unbeatable scenario.[1] Kirk was placed on academic suspension, pending an investigation into the matter,[1] but the inquiry was tabled when Nero escaped from captivity on the Klingon penal planet Rura Penthe,[4] and attacked Vulcan on Stardate 2258.42.[1]

With the aid of his friend McCoy, Kirk stowed away aboard the U.S.S. Enterprise NCC-1701.[1] Recognizing similarities to events on the day of his birth, Kirk convinced Captain Pike to make a more cautious approach to Vulcan, which likely saved the ship from Nero’s assault on the Starfleet relief force.[1] Nero succeeded in destroying Vulcan and capturing Pike, and Kirk was marooned on Delta Vega by Spock.[1] Kirk succeeded in returning to the Enterprise, however, with the aid of Lieutenant Commander Montgomery Scott, an engineer assigned to Starfleet Outpost Hunter[8] on Delta Vega, as well as an older version of Spock from the same future as Nero.[1]

Shortly after his return to the Enterprise, Kirk, who had been named Spock’s first officer by Pike in the captain’s absence, took command when Spock became incapacitated. Devising a daring plan, Kirk and Spock managed to rescue Pike, prevent Nero from destroying Earth, and ultimately destroyed Nero’s ship, the Narada, with the red matter weapon brought from the future.[1] In the aftermath of Nero’s attack, and with Starfleet’s forces decimated as a result, Kirk was not only placed on active duty prior to finishing his final year at the Academy, he was also breveted to the rank of captain and placed in permanent command of the Enterprise after Pike was promoted to admiral.[1]

Kirk soon took the Enterprise out for a deep space exploration mission. On Stardate 2258.56, the ship encountered a distress beacon from the S.S. Valiant, lost nearly a century earlier.[7] Kirk was joined on the mission by his old friends, Mitchell and Kelso, whom he’d brought aboard as part of the crew after becoming captain.[7] When the Enterprise came into contact with a strange energy field at the edge of the galaxy, nine crewmembers were killed, and Mitchell began to exhibit extraordinary powers.[7] Kirk tried to maroon Mitchell on a remote, uninhabited planet, also called Delta Vega, but after Mitchell forced Kelso to kill himself with a phaser, Kirk was forced to kill his friend.[9]

Some time later, while delivering relief supplies to the New Paris colony on Makus III, Kirk was placed in a difficult situation when a shuttle, carrying McCoy, Spock, Scott, and four other crew members, was forced to make an emergency landing on Taurus II during a survey of the Murasaki 312 quasar-like phenomenon.[10]