The Federation Starship Archon was a Daedalus class vessel,[1] and originally served in the United Earth Starfleet prior to the founding of the Federation, where it saw combat during the Romulan War.[2] Prior to the establishment of the Prime Directive, also known as Starfleet General Order 1, the Archon made contact with the inhabitants of the planet Capella. Later, General Order 6 was created and put into effect after the Archon bartered for substandard dilithium from an Orion trader; the dilithium caused the reactor aboard the ship to explode, nearly destroying the ship.[3] The Archon disappeared at planet Beta III,[4] a planet in the C-111 system,[5] in 2167.[6] The Archon, which saw combat service during the Romulan War alongside the Enterprise NX-01,[2] was pulled from orbit by a planetary computer system called Landru. The surviving crew members were absorbed into Beta III's society, becoming known as the Archons.[4] 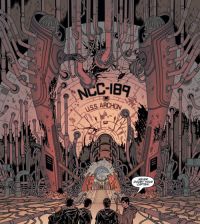 The Federation Starship Archon was an NX class cruiser assigned to a secret mission with Section 31 in the mid-22nd century, not long after the formation of the Federation. The crew of the Archon became part of an experiment in population and mind control on the planet Beta III conducted by Dr. Cornelius Landru. When the crew learned what Landru was doing, they attempted to stop him, but his computer system was able to pull the ship from orbit, leaving the crew already on the surface as the ship's only survivors. While some managed to escape and formed a resistance that continued through their descendants over the next century, many were "absorbed" into "the body"—their minds wiped and forced to conform to the control of Landru's experimental computer—and the wreckage of the Archon was used to supplement the machine. The truth of these events was concealed, and the very existence of the planet kept secret, until it was rediscovered by the crew of the U.S.S. Enterprise NCC-1701 on Stardate 2258.241.[7][8]

The Federation Starship Archon disappeared at planet Beta III in the early 22nd century. The Archon was pulled from orbit by a planetary computer system called Landru. The surviving crew members were absorbed into Beta III's society, becoming known as the Archons.[4]