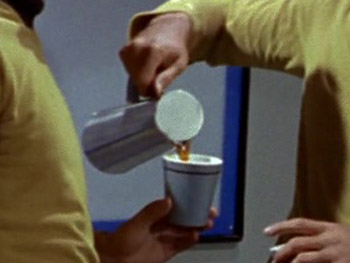 A dark beverage made with roasted coffee beans,[1] coffee was a caffeinated beverage.[2] Vina offered Captain Pike some coffee in an illusion of a picnic in his home town of Mojave created by the Talosians in 2254.[3] On Stardate 1512.1, Yeoman Janice Rand used a hand phaser to heat a pot of coffee when the power to the galley was out.[4] While stranded on the surface of Alfa 177 while the temperatures plummeted on Stardate 1672.1, Lieutenant Sulu joked that, with the transporter malfunctioning, they could try to lower a pot of hot coffee on a rope.[5]