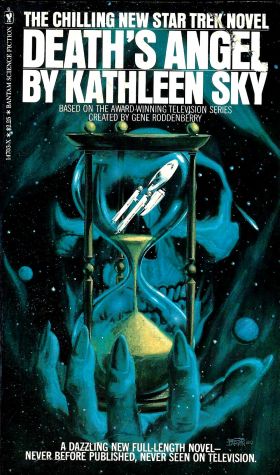 Stardate 6914.6: Murder stalks the corridors of the Enterprise

When Captain Kirk and Mr. Spock barely survived a mission to Delta Gamma IV, the deadly planet whose beautiful blue flowers destroy the mind and ravage the soul, Dr. McCoy felt something was dangerously wrong—just how wrong, he didn’t realize. When ambassadors on a sensitive Federation diplomatic mission to the Romulan Star Empire are murdered one by one, Kirk and Spock realize that they are dealing with a being of seemingly supernatural abilities. Now the entire crew of the Enterprise is at the mercy of this mysterious, self-proclaimed Angel of Death, which the most sophisticated Starfleet technologies are powerless to stop.