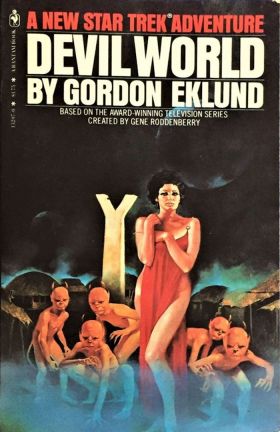 Stardate 4231.2: The Enterprise discovers planet populated by a race of demonic beings

Heartland... a mysterious planet populated by a small but terrifying race of demonic beings.

Heartland... where Captain Kirk falls in love with a beautiful, mysterious woman with a fatal secret.

Heartland... where Kirk, Spock, and the rest of the Enterprise crew will be challenged by an awesome disembodied intelligence, more powerful than any other force in the universe!

The Danons piled on top of Kirk. Teeth tore at his skin. Fingers shredded his clothing. His arms and legs were pinned, and he could no longer move. For some reason, he felt like laughing. What a way to die. Crushed underneath a hundred squirming devils. The air rushed out of his lungs. He could no longer breathe. He shut his eyes, opened them. The result was the same: blackness.

In the darkness, he heard two final sounds. One was laughter, high-pitched, howling, crazed. He knew it was Gilla. The other sound was less immediately identifiable. Only at the end, as consciousness faded, did he realize what it had to be.

Someone was firing a phaser...