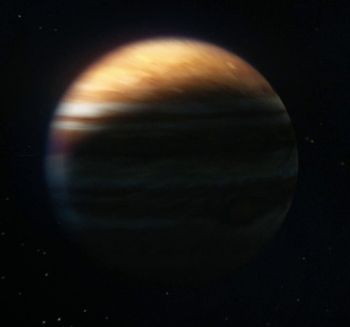 A Class J planet,[1] Jupiter is the largest planet in the Sol system, and orbits fifth from its parent star.[2] Although Jupiter, being a gas giant, is uninhabitable by humanoid life, Starfleet maintains military and support facilities near and around the planet.[3][4] Jupiter's four largest moons, known as the Galilean moons, were also colonized by private Human commercial enterprises.[5]

Jupiter roils with constant storms, the most famous of which, the Great Red Spot, remains one of the planet's most popular sightseeing destinations. The Great Red Spot was first observed through a telescope in the 17th century by Galileo Galilei;[5] it was still going strong well into the 24th century.[7] The storms were generated by the heat from the planet's interior; this heat circulated through the atmosphere, keeping the clouds in constant motion. Although direct observation remained impossible well into the 24th century,[8] it was widely accepted that Jupiter had a metallic liquid core.[5]

Jupiter was a part of Human consciousness, essentially, since the beginning of that race's civilization. Early astronomers saw it as a bright light in the night sky, but one that behaved differently than nearly all of the others. In the 17th century, Galileo was the first astronomer to view Jupiter—and its four largest moons—through a telescope. In the late 20th century, unmanned probes explored the Jovian system.[5] By the mid-22nd century, Humans had begun to expand into Jupiter and its moons with outposts like Jupiter Station[3] and the Jupiter Outposts.[6]

The Galilean moons—so named in honor of Galileo, who first observed them—are Io (Sol Va), Europa (Sol Vb), Ganymede (Sol Vc), and Callisto (Sol Vd). These moons all have an average gravity of 0.2g, little or no atmosphere, and are composed of silicate rock. Three of the moons—Ganymede, Europa, and Callisto—also have significant amounts of water ice.[5]

Although all settlements in the Jovian system fall under the jurisdiction of the United Earth Republic and the United Federation of Planets, they are also the property of the private entities that established them, and are treated as private property. Considering that the Galilean moons are owned and operated by private concerns, it is perhaps unsurprising that the Humans who live there lack the same same feisty independence of many other colonies. Permanent populations are also small, with workers coming and going in shifts that last as little as a few months at a time. From time to time, rumors surface that undesirable elements—be they the Orion Syndicate or Yridian gangsters—have infiltrated the companies' mining operations, but nothing has ever been confirmed.[5]

In 2140, Reykeyser Industrial Metals (RIM) began drafting plans for setting up a mining colony on Ganymede, the largest satellite in the Sol system. The Romulan War put a temporary hold on most extra-planetary development, but when the war ended, the initial surveys had already been completed, and construction began in 2161; the first mining complex began operation in 2162.[5]

Incredibly, the United Earth authorities apparently hadn't considered private exploitation of the Jovian moons, so when RIM moved forward with their plan, no ownership rights had been established. The company, then, simply laid claim to the entire moon. To some observers, this was little better than the corporate land grabs of the 19th-century American frontier. The claim went largely undisputed, however, for a variety of reasons, and the company retained ownership of Ganymede.[5]

By 2370, twenty mine pits dotted Ganymede, all owned in whole or in part by RIM, which had long since established itself as one of Earth's leading producers of steel and other industrial metals. Most of the Ganymedan mines produced iron ore, but some also produced copper or bauxite ores; no precious metals were found on Ganymede. The ore was transported to the company's large processing plant in the bowl of a large crater. A small city, capable of supporting 20,000 workers and dubbed Ganymedeville, grew around the plant.[5]

Ganymedeville was composed of a series of large, airtight domes with powerful artificial gravity and life support systems. It was not an especially colorful place, by most accounts, as it combined the grit of an industrial city with the underdeveloped feel of a frontier town. Conversely, it could also be said that miners returning to the town from a day's work could inject their own particular liveliness.[5]

While the initial costs of establishing the colony were high, they proved over the long term that transporting heavy loads of rock and ore in a low-gravity environment produced cost savings that more than paid back the initial investment. Some of RIM's partners on Ganymede included the Andorian keth Vetra, and, in the late 24th century, the Klingon House of Katath, which had close ties to the Klingon military.[5]

Operating in much the same manner as the Reykeyser Industrial Metals concerns on Ganymede, the mining colony on Callisto was wholly owned and operated by Dennis and Young Amalgamated Industries, a Mars-based conglomerate. In 2165, Dennis-Young claimed Callisto in much the same manner as RIM had claimed Ganymede four years earlier. Just as with Ganymede, the acquisition of Callisto was met with only token opposition. By the 24th century, Dennis-Young operated six mining pits, which processed iron ore.[5]

Inspired by the discovery of primitive life forms inhabiting the warm waters that lay beneath Europa's icy crust, a colorful entrepreneur, Richard Nkame Brashear, conceived of Club Jove Adventure, which quickly became one of the most talked about (and expensive) tourist attractions in the Sol system. In 2198, before the laws regarding private ownership of moons in the Sol system were changed, Brashear staked a considerable part of his fortune on Jupiter as a high-end tourist destination, and he opened the resort on Europa. As with most of his bets, Club Jove Adventure paid off handsomely. Club Jove Adventure offered luxury accommodations and gambling to its guests, as well as shuttlecraft tours of the Jovian system. The resort's submersible tours, however, were always its main draw. Visitors descended a mile through the surface ice to the resort's submersible dock, from which they would embark on a three-hour tour of Europa's "ocean," the relatively warm layer of water that lay between the moon's icy crust and its core. Volcanic vents opened up on the seabed, releasing heat from the core, and colonies of primitive aquatic life formed around them. After Brashear's death in 2250, his heirs sold the resort to the Hopkins Interplanetary Hotels chain, and they operated it at a substantial profit from that point forward. [5]

Of the Galilean moons, only Io was never commercially exploited. Dotted with volcanoes that spewed molten rock and sulfur dioxide, no survey of Io ever turned up anything more than trace amounts of precious metals, such as gold or latinum, or substances with advanced technology applications, such as dilithium. Its sole, plentifully-available resource was sulfur, but as Xerxes Behn, who was CEO of Reykeyser Industrial Metals during the acquisition of Ganymede, said of the prospect of a similar endeavor on Io, "No one needs sulfur that badly." By the 24th century, the only attempt to commercialize Io was a scenic shuttle tour that viewed the moon's volcanic eruptions from a safe distance.[5]