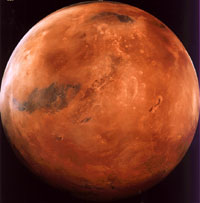 The first Human settlers arrived on Mars in 2103.[2] The colony's original flag was based on a painting of a bullfighter on velvet.[5] In 2105, a serial murderer killed eight women, and the crime would go unsolved until 2266.[12]

Mira Romaine[9] and Simon Tarses[10] were both born on Mars. Leah Brahms resided on Mars while working on the Galaxy class starship project at Utopia Planitia Fleet Yards.[8]

By 2155, the terraforming of Mars was well underway, and only thermal insulation gear and simple breathing masks were needed to venture onto the planet's surface, rather than full environmental suits.[3] By the 24th century, Mars had been completely terraformed.[6] Only 10% of Mars' surface is covered by water, nearly all of which is in freshwater lakes created from existing impact craters.[13]

One of Mars' most famous features is Olympus Mons, an extinct volcano and the tallest mountain in the Sol system. Another notable feature is Valles Marineris, a network of steep canyons that stretches for 4000 kilometers. Hellas Mare is a huge freshwater lake in the southern hemisphere created from Mars' largest impact crater, Hellas Planitia.[13]

Human settlement began in 2103,[2] when the first permanent colony was established on the plains of Utopia Planitia. Established by the United Space Probe Agency, the settlement was called Nova Ares and its first inhabitants were mostly UESPA support personnel who oversaw ship launches and refueling.[13] Some of these early settlers included ancestors of Jean-Luc Picard.[14]

The first Humans to settle Mars adopted the term "Martians" in jest. Every year, they organized the H.G. Wells Martian Festival, named in honor of the author of "War of the Worlds," though the festival became more of a curiousity by the 24th century. As the Martian independence movement gained momentum in the mid-22nd century, the residents of Mars took the term more seriously, and it became a symbol of their desire to govern themselves. As the colony grew, it attracted free spirits who just wanted to live on Mars. Settlement had spread beyond Utopia Planitia, and the colonists were sufficiently numerous and confident of themselves that a momement for independence began to form.[13]

In 2152, informal groups of activists coalesced to form the 100-member Mars Constituent Assembly,[13] which published a document called the "Fundamental Declaration of the Martian Colonies,"[1] which asserted that the Mars colonists were entitled to the same political and legal rights as anyone living on Earth. The question of what to do with Mars became even more troublesome when war broke out with the Romulan Star Empire in 2155. With the war raging, Earth authorities and the Mars Constitutent Assembly approved an arrangement in 2158 in which Mars would retain its allegiance to Earth, while the colonists would gain considerable authority to govern themselves. The formation of the United Federation of Planets in 2161 rendered any remaining controversy over Martian independence moot.[13]

In 2230, Starfleet expanded the old fleet support bases and built the Utopia Planitia Fleet Yards around them.[13] The Utopia Planitia yards quickly became one of Starfleet's most important construction and support facilities and the birthplace of some of its most famous vessels, including the U.S.S. Enterprise NCC-1701-D,[15] the U.S.S. Defiant NX-74205,[16] and the U.S.S. Voyager NCC-74656.[17]

By the 24th century, Nova Ares had become a thriving city of 100,000 residents. The Mars Elective Assembly meets in a conference hall built on the site of the first meeting of the Assembly in 2147. The tallest structure in Nova Ares is a sleek, 100-story skyscraper that houses the headquarters of Dennis Young Amalgamated Industries, the largest private corporation on Mars.[13]