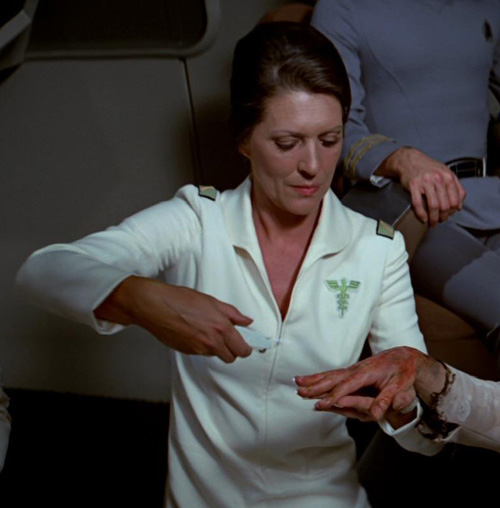 After her fiancé and teacher, Doctor Roger Korby, went missing and was presumed dead, Christine Chapel did not give up hope that she would find him alive, and she abandoned her career as a bio-researcher to serve in Starfleet in the hope that she would find her fiancé among the stars.[1] By 2266, Chapel was posted to the U.S.S. Enterprise NCC-1701.[2] As a nurse on the Enterprise, Chapel proved to be an asset to Dr. McCoy's sickbay, maintaining a professional attitude in some difficult situations.[3]

Chapel believed that she had found Korby on Stardate 2712.4, but he had transferred his mind into an android body. After this mission, Chapel decided to remain aboard the Enterprise.[1] Her love for Korby had already started to find a new focus on the ship's unobtainable half-Vulcan First Officer, Commander Spock, but, much to her disappointment, he never seemed to return her interest.[2] The closest that Chapel came to having a romantic encounter with Spock was when they were forced to kiss by the powerful Platonians.[4]

Following the end of Captain Kirk's first five-year mission aboard the Enterprise, Chapel returned to school and completed her degree as a medical doctor, and became the Chief Medical Officer aboard the ship, now commanded by Captain Will Decker, and replacing the now-retired Dr. McCoy.[5] She remained aboard following the V'Ger incident as a member of McCoy's surgical staff before she accepted a promotion to lieutenant commander and a post at Starfleet Command.[6]