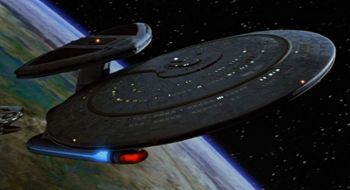 The design of the Nebula class cruisers was based on the Galaxy Class Starship Development Project's plans;[1] the saucer, nacelles, and main deflector were all virtually identical to the Galaxy class components.[2] Although developed after the Galaxy Class Project was already underway, Nebula class vessels were commissioned first, and were roughly twice as numerous as their Galaxy class cousins,[1] owing to the fact that the Nebula class was somewhat smaller and easier to build.[2] Using many of the same components, the two classes were more similar than dissimilar. Both used the same model of Warp drive, both mounted the Type X Phaser arrays and Mark 80 direct-fire torpedo launchers, and both used the same CIDSS-3 shield grid system.[3]

Nebula class ships undertook specific, though broadly defined, duties, including scientific and cultural surveys, threat response, and humanitarian relief.[1] The versatility of the class was enhanced by its characteristic aft dorsal pod, which could be reconfigured at any starbase,[2] based on the needs of the mission. Different pod configurations, such as the cargo pod, sensor pod, or tactical pod, gave the Nebula class exceptional flexibility.[3] Before the Dominion War, the class typically installed a powerful sensor array for planetological research and astrometric surveys. During the war, the Nebula class typically mounted a heavy tactical pod with additional loadouts of Phaser arrays and torpedo tubes,[2] and were reassigned to a number of mobile fleets, as tactical pods could be constructed several times faster than building new vessels.[3] Reinforced and redundant systems aboard the ships gave the class a well-earned reputation for reliability. The class had two aft shuttlebays, and could accommodate a variety of auxiliary craft to provide optimal efficiency for whatever missions the ship would undertake.[3]

Starfleet often used Nebula class vessels to test experimental configurations of weapons, sensors, scientific instruments, field projectors, and more. This adaptability made the Nebula class ideal for almost any scientific or exploration mission, and its powerful sensor packages gave it a useful role to play in defense and reconnaissance missions as well.[2] Nebula class ships continued to play a vital role in patrol and exploration duty, as well as the ferrying of supplies and parts to distant colonies and stations. The Nebula class replaced the aging Miranda class as the workhorse scientific platform in Starfleet, with many assigned to long-term survey operations and research initiatives.[3]

The Nebula class was produced at Utopia Planitia Fleet Yards, Mars.[4] Most Nebula class cruisers could operate for up to five years on a standard mission. Starfleet Command planned to continue the development of the class into the 25th century, and plans were already on the drawing board in 2375 for a significant refit project.[3]

Nebula class cruisers could be configured with a number of different pods, based on the needs of the mission. A pod could be swapped out in six hours at any starbase or station facility.[3] Configurations included: