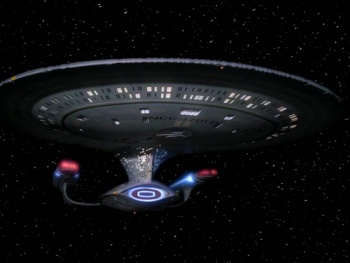 The culmination of an ambitious, 14-year design process, the Galaxy class represented Starfleet's most sophisticated achievement in multimission ship systems design at the time of the commissioning of the lead vessel, the U.S.S. Galaxy NCC-70637 in 2357. When the Galaxy Class Starship Development Project was announced in July 2343, much of the original theoretical work had been accomplished, particularly in the propulsion field. While the attempt to surpass the primary warp field efficiency barrier with the Transwarp Development Project in the 2280s proved unsuccessful, the pioneering achievements in warp power generation and field coil design eventually led to the uprated Excelsior and Ambassador class starships.[3] Many of the new developments created for the Galaxy Class Development Project found their way into other ship classes that entered service before the Galaxy class itself joined the active ranks, such as the Nebula class.[9]

Some in Starfleet Command wanted the Galaxy class to serve first and foremost as a warship. A vocal member of that group was Admiral Carstairs, of the Starfleet Operations Planning Board, said that "what we need is something that will frighten our enemies away from [our] territory once and for all. The new Galaxy class is just such an instrument of deterrence." This view, however, was ably countered by the board's Commodore Santin, who responded to Carstairs that "converting this class into the ultimate battlewagon—as you have described it on more than one occasion—may well have an effect opposite the one you desire."[4]

Due in part to their size, Starfleet Command never intended to order a large number of Galaxy class vessels.[9] Starfleet Command initially ordered six Galaxy class ships. A projected total of twelve vessels were held as an option to be activated, should conditions warrant. Once the initial spaceframe design was finalized, it was decided to proceed with the completion of six vessels and to take the other six to the end of the framework stage only. These six spaceframes were broken down into manageable segments and dispersed by cargo carriers to remote sites within the Federation as a security measure.[3] Those projected emergency conditions came in the aftermath of the Battle of Wolf 359, those six spaceframes were completed, and additional Galaxy class vessels were ordered.[9]

In 2369, the Galaxy class saw an Uprated refit, which added a third torpedo tube; this tube, located within the aft-facing cavity on the separated Saucer Module, gave additional firepower to the saucer during separated flight modes. Additionally, newer, more powerful deflector arrays were installed, further enhancing the defensive capabilities of the Galaxy class.[9] Resulting from the loss of several vessels, including the U.S.S. Yamato NCC-71807,[10] this refit was meant to counter new, unforeseen threats, and to safeguard the crew.[9]

Galaxy class starships took part in a number of large-scale fleet actions during the Dominion War, and entire wings of these mammoth vessels engaged Dominion forces in battle at Vulcan, the Chin'toka system, and Earth.[9] During the war, a number of Galaxy class hulls were pulled from the internal structures work path, equipped with additional weapons, and launched with 65% of their spaceframe volumes empty.[2] Following the war's end, Starfleet Command halted production on the Galaxy class in favor of a return to more mission-specific designs like the Nebula, Nova, and Akira classes.[9]

The Galaxy class consists of two spacecraft systems integrated to form a single, functional vessel. Under specific emergency conditions, the two vehicle elements may perform a separation maneuver and continue independent operation. The two elements, the Saucer Module and the Stardrive—or Battle—Section, were normally joined together by a series of eighteen structural docking latches, numerous umbilicals, and turbolift pass-throughs. Risks and vehicle stress associated with repeated undockings and redockings, however, prevented frequent use of the separation maneuver. In the event the Saucer Module was disabled near a planetary body and could not maintain a stable orbit, landing the saucer was the final option.[3] 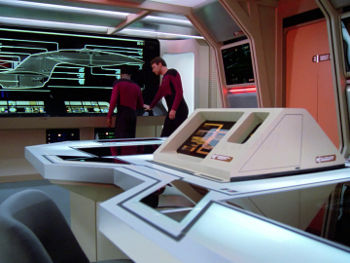 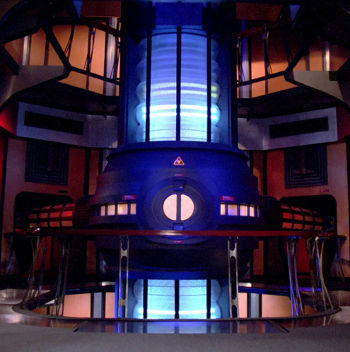 The Main Engineering control center on Deck 36 served as a master control for the ship's warp propulsion system, as well as the impulse propulsion system and other engineering systems. Main Engineering also served as a backup control center in the event of failure of the Main Bridge and the Battle Bridge. Workstations at this location could be reconfigured to emulate Conn, Ops, Tactical, and other command operations.[3]