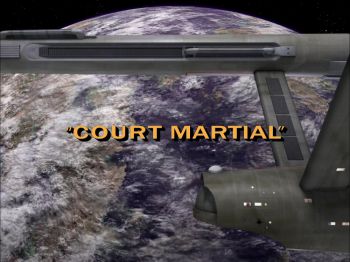 Kirk is recalled for a potential court-martial. During an ion storm, the Enterprise takes a severe buffeting and Records Officer Ben Finney enters the starship's ion pod to take important readings. When the storm makes it necessary to jettison the pod, Captain Kirk follows normal procedures and warns Finney to evacuate. The pod is jettisoned, with Finney apparently still inside. At Starbase 11, Commodore L.T. Stone institutes a court martial against Kirk after discovering that computer records show that the captain did not give Finney an adequate chance to escape from the pod. Lieutenant Areel Shaw, the prosecuting attorney and an old girlfriend of Kirk's, retains the brilliant but eccentric lawyer Samuel Cogley to defend the captain. Although the evidence is against Kirk, Mr. Spock refuses to believe that his captain did not go by the rules. The Vulcan decides that the Enterprise computer's evidence is wrong. He plays chess with the computer, winning several games, and thereby discovers the machine's programming has been altered. Finney is actually alive, in hiding aboard the ship: due to an old grudge, he had hoped to fake his death to discredit Kirk.