From Trekipedia
(Redirected from Operation--Annihilate! (Episode))
Jump to: navigation, search
Prev: "The City on the Edge of Forever"
Star Trek, Season 1, Episode 29
Next: "Catspaw" 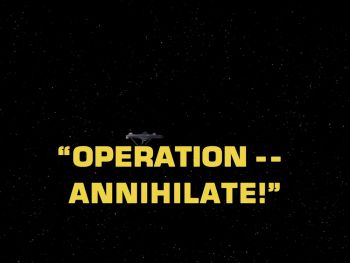 The Enterprise crew saves Deneva from deadly parasites. The planet Deneva, home of Captain Kirk's brother George "Sam" Kirk and his family, is in the path of an interplanetary epidemic of mass insanity. Approaching the planet, the Enterprise intercepts a radio message from a Denevan pilot who deliberately steers his ship into the sun—destroying himself and an unknown danger. Beaming down with a landing party, Kirk discovers his brother dead, his sister-in-law Aurelan dying, and his nephew Peter unconscious. Deneva has been invaded by bat-size, amoeba-like creatures that intertwine with the humanoid nervous system, manipulating their victims by causing excruciating pain. Spock is attacked and infected by one of the creatures. Kirk, remembering the Denevan who flew into the sun, theorizes that the creatures, who have proven resistant to everything Dr. McCoy has thrown at them, may be sensitive to intense light. Spock volunteers to be McCoy's guinea pig. The experiment works—but Spock has been blinded by exposure to the light. Too late, McCoy discovers that only ultraviolet light is needed to kill the creatures. A chain of trimagnesite satellites is placed in orbit to free the Denevans from their nightmare—just as a fully sighted Spock returns to the bridge. Vulcans, it turns out, developed an extra eyelid to protect them from the harsh sunlight on their homeworld.

Prev: "The City on the Edge of Forever"
Star Trek, Season 1, Episode 29
Next: "Catspaw"
Retrieved from "http://trekipedia.com/mw/index.php?title=Operation_--_Annihilate!_(Episode)&oldid=10912"
Categories:
Edit ‌