A Taste of Armageddon (Episode)

From Trekipedia
Jump to navigation Jump to search
Prev: "The Return of the Archons"
Star Trek, Season 1, Episode 23
Next: "Space Seed" 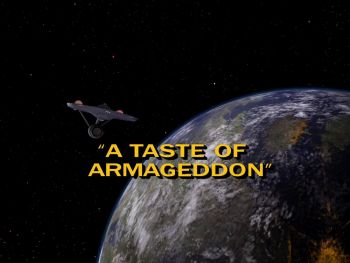 "A Taste of Armageddon"

The Enterprise is diverted by two planets fighting a computerized war.

The Enterprise journeys to planet Eminiar VII to establish diplomatic contact. Although the Eminiars warn Captain Kirk against visiting, at the insistence of Federation Ambassador Robert Fox, a landing party beams down. They discover Eminiar has been at war for centuries with its neighbor world, Vendikar. Suddenly, Kirk is informed that the Enterprise has been declared a "casualty," and all aboard her are considered dead. Through Eminiar's council head, Anan 7, and a young woman named Mea 3, Kirk learns that the "war" is fought with computers: "casualties" on both planets willingly enter antimatter chambers and die to prevent all-out destruction. After the landing party is imprisoned, Ambassador Fox beams down and learns of the situation—whereupon Kirk and Spock escape and destroy Eminiar's computers. Now, Kirk tells the Eminiars, they will have to fight their war for real. To escape the horrors of material destruction, the two worlds, with the aid of Ambassador Fox, begin to negotiate for peace.

Prev: "The Return of the Archons"
Star Trek, Season 1, Episode 23
Next: "Space Seed"