From Trekipedia
Jump to: navigation, search
Prev: "A Taste of Armageddon"
Star Trek, Season 1, Episode 24
Next: "This Side of Paradise" 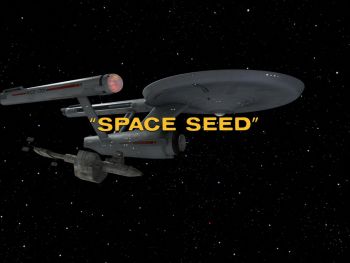 The Enterprise discovers a "sleeper ship" from the late twentieth century. The crewmembers are found in a state of suspended animation, and the leader, a magnetic individual named Khan, is revived. Ship's historian Marla McGivers is strongly attracted to the man—whom Spock soon identifies as Khan Noonien Singh, the most dynamic and dangerous of the artificially bred men of the 1990s—and once absolute ruler of more than a quarter of Earth. With Marla's aid, Khan, supremely contemptuous of the Enterprise crew—especially Captain Kirk—revives his crew and takes the ship. But when she realizes Khan intends to kill those who will not aid him, Marla rescues the captain. Kirk then unleashes anesthetic gas throughout the occupied sections of the ship and recaptures the Enterprise. He gives Khan and his people the choice of facing arrest and incarceration or colonizing a virgin and hostile planet, Ceti Alpha V. Khan chooses to be a colonist, and Marla elects to go with him. Spock wonders what will come from these "seeds" the Enterprise has planted.

Prev: "A Taste of Armageddon"
Star Trek, Season 1, Episode 24
Next: "This Side of Paradise"
Retrieved from "http://trekipedia.com/mw/index.php?title=Space_Seed_(Episode)&oldid=10917"
Categories:
Edit ‌