From Trekipedia
Jump to: navigation, search
Prev: "The Squire of Gothos"
Star Trek, Season 1, Episode 19
Next: "The Alternative Factor" 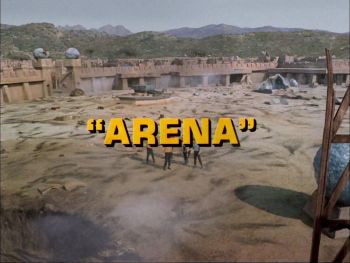 Kirk is pitted in a barehanded duel with a Gorn.

Captain Kirk receives a request from Commodore Travers to visit the Starfleet base on the new colony at Cestus III. Upon arriving, Kirk finds the base completely destroyed. Suddenly Kirk and his landing party are ambushed; Lieutenant Harold, the lone survivor on Cestus, says that the base was destroyed by a sudden and merciless attack. His people didn't have time to request the Enterprise's presence. The call was a trap, set by the attackers. The Enterprise follows the enemy ship, but the two vessels intrude upon the territory of the powerful Metrons, who decide to settle the conflict by having Kirk fight the alien commander, a Gorn, in single combat: the loser's ship will be destroyed. The Gorn is a human-sized, immensely strong reptilian being, as resourceful as Kirk in battle. The captain manages to construct a weapon with which he defeats the Gorn—and his refusal to kill his defeated opponent impresses the Metrons. Perhaps one day, they tell Kirk, the Federation may be mature enough to meet them as friends and equals.