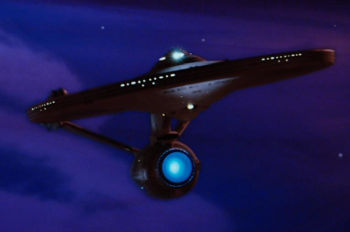 The Federation Starship Intrepid, an Enterprise class cruiser, was commissioned on Reference Stardate 2/1706 (June 2217).[1] Several months later, on Reference Stardate 2/1711.15 (15 November 2217), the Intrepid, assigned a patrol route near the Triangle, was near Ayirn when that planet was raided by the Klingon battlegroup known as the White Flame, but was too far to respond before the attack was over.[2]