From Trekipedia
Jump to: navigation, search
Prev: "Dagger of the Mind"
Star Trek, Season 1, Episode 11
Next: "The Conscience of the King" 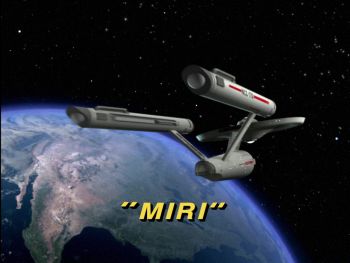 A strange group of children is discovered on an Earth-like planet.

The Enterprise discovers a planet that looks amazingly like Earth, where they find a ruined, deserted city. Its only inhabitants are "children," all centuries old, the product of life-prolongation experiments. After exposure to the results of that research, the adults of the planet died horrible deaths, acquiring skin blotches and going berserk. When the children's slowed metabolism finally allows them to reach puberty, they too will sicken and die.

Captain Kirk and the entire landing party—except Spock—are infected with the disease. Dr. McCoy must find an antidote before they go mad and die from the illness. The children, who call themselves the Onlies, mistrust all adults, who they call Grups. They harass the intruders, stealing their communicators and abducting Yeoman Rand. Kirk enlists the aid of one—Miri, who has a crush on the captain. She assists in recovering the kidnapped yeoman and the party's communicators. McCoy, having synthesized an experimental antidote, uses it on himself and proves its effectiveness, saving his shipmates and the planet's "youthful" inhabitants.

Prev: "Dagger of the Mind"
Star Trek, Season 1, Episode 11
Next: "The Conscience of the King"
Retrieved from "http://trekipedia.com/mw/index.php?title=Miri_(Episode)&oldid=10907"
Categories:
Edit ‌