From Trekipedia
Jump to: navigation, search
Prev: "The Menagerie"
Star Trek, Season 1, Episode 17
Next: "The Squire of Gothos" 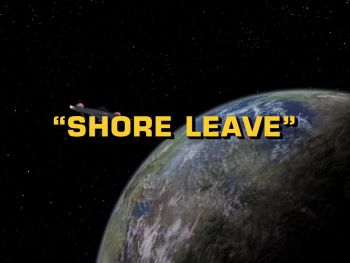 On shore leave, the crew's thoughts come to life.

Captain Kirk decides to give his crew shore leave on an inviting Earth-like planet—but trouble begins when McCoy sees a giant, talking White Rabbit being chased by a little girl. Sulu is menaced by a Samurai; other crewmen are strafed by aircraft, chased by Tigers, and threatened by swordsmen. Kirk meets Finnegan, an old nemesis from his Academy days, and Ruth, an old flame. Then McCoy is killed by a Black Knight on horseback, and as the perils become progressively deadlier, Spock and Kirk realize their thoughts are being brought to life. A kindly old man appears, identifying himself as the planet's Caretaker and explains they are in an "amusement park" where advanced alien science synthesizes the "entertainment" from the thoughts of the "vacationers." McCoy reappears, alive and well in the company of two Rigel cabaret girls. Kirk decides that, with the proper mental precautions, this can be a good shore leave planet after all—just as Ruth reappears.