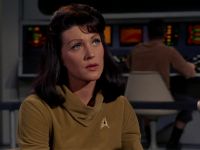 Captain Kirk's five-year mission was established to have begun in 2265 in the Star Trek: Voyager episode "Q2". The Star Trek] episode "The Menagerie, Part I" further establishes that Spock served under Captain Pike for 11 years, and that it had been 13 years since the events of "The Cage," meaning that Stardate 3012.4 fell two years into Kirk's command. The episode "Charlie X" further added weight to this, establishing both Stardate 1533.1 and the Earth date of Thanksgiving, which falls on 23 November in 2265. As the stardates ranged from the mid-1000s to the low 3000s in the first season and continued to increase at approximately 1000 per season afterward, it seems logical to conclude that the first season spanned nearly two years, and later seasons one each, with the second season chronicling the 3000s, the third season the 4000s and 5000s, and the Animated Series the 5000s. If Captain Kirk's command began on or about Stardate 1000, this would put the end of the five year mission on or about Stardate 6000, shortly after the end of the Animated Series. Using these dates as a reference point, the following can be established: