From Trekipedia
Jump to: navigation, search
Prev: "The Devil in the Dark"
Star Trek, Season 1, Episode 27
Next: "The City on the Edge of Forever" 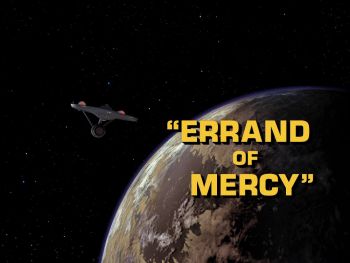 As hostilities between the United Federation of Planets and the Klingon Empire reach their peak, the Enterprise is dispatched to the strategically located planet Organia. The Organian Council of Elders, five smiling, elderly men, seem strangely unconcerned about the prospect of war centering about their planet. Klingon Commander Kor leads an occupation force in an invasion of Organia. Kirk and Spock go undercover, disguised as two traders, but are betrayed by the council and condemned to death. The Organians rescue them very easily. As the moment of all-out war approaches, the Organians reveal themselves as omnipotent beings of pure energy. Using their mental abilities, they neutralize all weapons. Kirk realizes with horror that part of him had been anticipating the hostilities; he is also relieved to know that from now on the Organians will be watching to see that things do not get out of hand.

Prev: "The Devil in the Dark"
Star Trek, Season 1, Episode 27
Next: "The City on the Edge of Forever"
Retrieved from "http://trekipedia.com/mw/index.php?title=Errand_of_Mercy_(Episode)&oldid=10893"
Categories:
Edit ‌