Construction on the Federation Starship Eagle,[1] a Constitution class cruiser,[2] was authorized by the Starfleet Appropriation of Stardate 3220. The Eagle was constructed to the Bonhomme Richard subclass specifications,[3] and commissioned in 2247.[4] On Reference Stardate 2/0405 (May 2262), the Eagle was refit to Mark III specifications.[5] Prior to 2263, Commander James T. Kirk served as first officer aboard the Eagle under Captain Botwin.[6]

Although largely crewed by Humans at first,[6] the Eagle would later host an all-Andorian crew under Captain Igrilan Kor,[7][8] and the Eagle was the most decorated Starfleet vessel of its time.[7][4] In 2275, the Eagle made first contact with the enigmatic Breen. Captain Kor beamed over to the Breen ship and, although language barriers impeded productive diplomatic negotiations, reported that the Breen were a peaceful, if somewhat withdrawn, species. This contributed a great deal to future confusion over the Breen's attitude when they, apparently inexplicably, became hostile.[8] 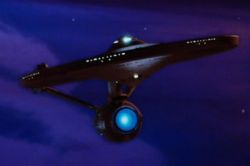 The Federation Starship Eagle, a Constitution class cruiser, was commanded by Captain Botwin in 2260, and his first officer was Commander James T. Kirk.[10]