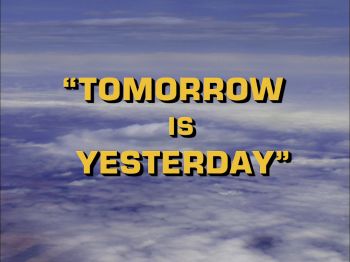 The Enterprise is thrown back to 20th century Earth.

After an encounter with the gravitational forces of a "black star," the Enterprise is hurled backward in time to the twentieth century. Flying over Nebraska, the starship is sighted and classified as a UFO, and Air Force pilot Captain John Christopher photographs the Enterprise with his jet's wing cameras. When his jet is accidentally destroyed by the starship's tractor beam, he is transported aboard. After first deciding that it would not alter history if Christopher never returned to Earth, Spock then discovers that Captain Sean Geoffrey Christopher, the pilot's as-yet-unborn son, will lead an important expedition into space.

This leaves Kirk and crew with three large problems: retrieving the film that shows the Enterprise in Earth's atmosphere; getting the pilot back where he belongs; and returning to their own time without changing history. After Sulu, Kirk, and Spock surreptitiously obtain the film, Scotty duplicates the "slingshot effect" responsible for their temporal displacement. Christopher is returned to his jet, and the Enterprise returns home.